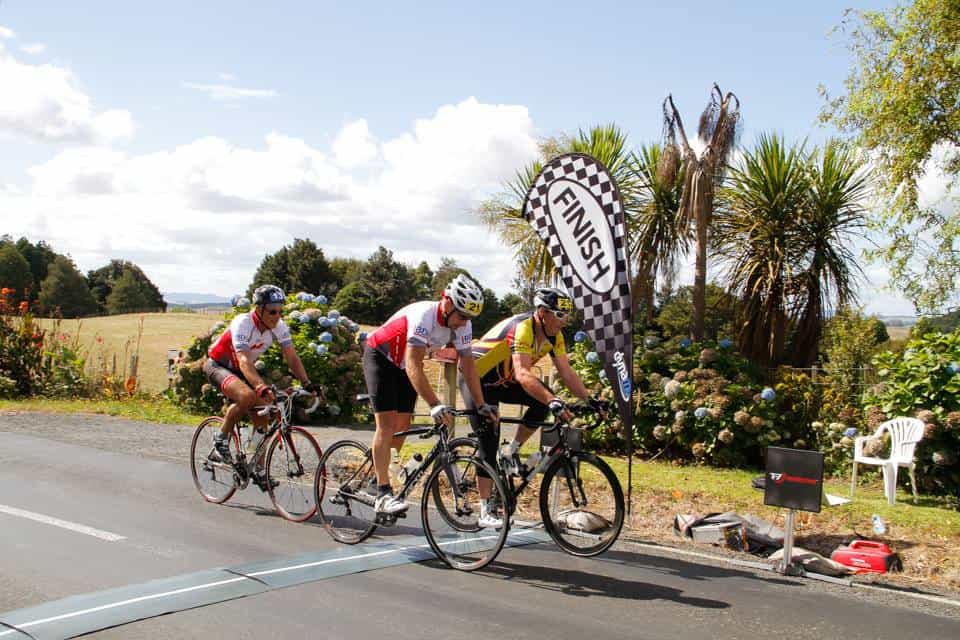 The BDO Wellington to Auckland Cycle Challenge reached its final destination in Pukekohe on the weekend, with close to 200 riders making their way safely through the final two stages from Hamilton to Glen Murray and then on to the finish line to waiting family, friends and supporters, each with their own tale of achievement and goals achieved in a remarkable kiwi recreation event.

Organised by former Olympic cyclist Stephen Cox and his company Dynamo Events, the BDO Challenge is an event designed for all New Zealanders, regardless of ability, background or experience with participants self seeding themselves into a variety of riding groups.

Group One was taken out by the man who held the yellow jersey throughout most of the week with Jason Thomason (Taranaki) dominating the race in the final two stages to protect his comfortable lead, eventually finishing clear of Michael Jones and Mel Titter.

“This was quite a challenging week, thanks in the main to Michael and a few of his friends on the road for the competition they put up but eventually Mel and I proved strong enough and I was able to come away with the win,” said Thomason.

In the women’s Group One it was Olwen Gilbert taking out the honours from New Zealand paralympian Fiona Southorn and Anita Tegel in third.

The finish line though and indeed this event is more about the many riders who were taking on the event not to see how quickly they could ride, but whether they could reach the finish line at all and to soak up the experiences along the way.

Ray Hyndman (Lower Hutt) was one of the remarkable stories, the 79 year old was the oldest in the race and overcame the tough conditions early in the week and some long days in the saddle to cross the line to a great reaction from the waiting crowd, whereupon he was presented with his finisher’s medal.

“That was tougher than I thought it was going to be to be honest. I knew it was a big challenge but with the weather the way it was early in the week, it was hard going at times.

“But I have finished and met some great people along the way. That is the best thing about this ride, as well as the roads we travelled down, it was the people you meet along the way and shared a few stories with once you crossed the finish line.

“I am not finished yet though, I am going to spend a week in Auckland resting up and then plan to ride up to Cape Reinga with a group called the ‘Geriatrix Cycle Club’ so that will be fun as well.”

The award for Most Impressive Rider throughout the week went to one half of a couple who only entered in November, in fact it was only in late November that Veronica McNeil and Pete Mayes bought their first road bikes after being advised by Stephen Cox that the mountain bikes ‘might not be best to use on this event’.

Both took on the challenge having hardly ridden a bike before and after struggling through the poor weather on the opening stage up the Rimutaka’s, Veronica battled away every day, improving her riding skills with the help of advice from Stephen Cox throughout the week. She was a popular recipient of the award which included a free entry to next year’s BDO Challenge and was typical of the ‘can do’ spirit in this event.

It wasn’t just the Kiwis taking part, with Victoria Wiltshire deciding on the BDO Challenge as a way to see the North Island during her overseas travels while Reinhard Borner had travelled from Germany for similar reasons, to ride and see New Zealand at the same time. Gary Fierer returned from his native New York to ride again, this time more prepared for the distances and a little more recovered from the jet lag that slowed him up a little last year.

In the battle of the Farmers it was John O’Brien (Palmerston North) who took the honours from Timaru Dairy Goat Farmer Phil Clapham in a friendly rivalry that was talked up each night over a beer or two at prize giving.

“I only heard about this race a few weeks ago and decided to give it a go and have loved every minute of it, both the riding but especially the people you ride with and the stories we have shared each day,” said John O’Brien.

In the BDO Corporate Challenge it was a dominant week from 2Degrees Mobile, ahead of Invacare and ASB, taking out all but one of the stages to take out the inaugural $100,000 prize package to then donate to a charity of their choice, with the charity being revealed at a presentation on February 26. The prize package comes courtesy of a group of corporate sponsors including BDO, ASB, Ideas Shop, John Andrew Ford, Ogilvie, XERO, Lowndes Associates, Langton Hudson Butcher, .

The BDO Wellington to Auckland Challenge official charity partner is Multiple Sclerosis New Zealand, with MS benefiting to the tune of close to $30,000 from money raised throughout the week in a charity auction, raffle and on line participant fund raising.