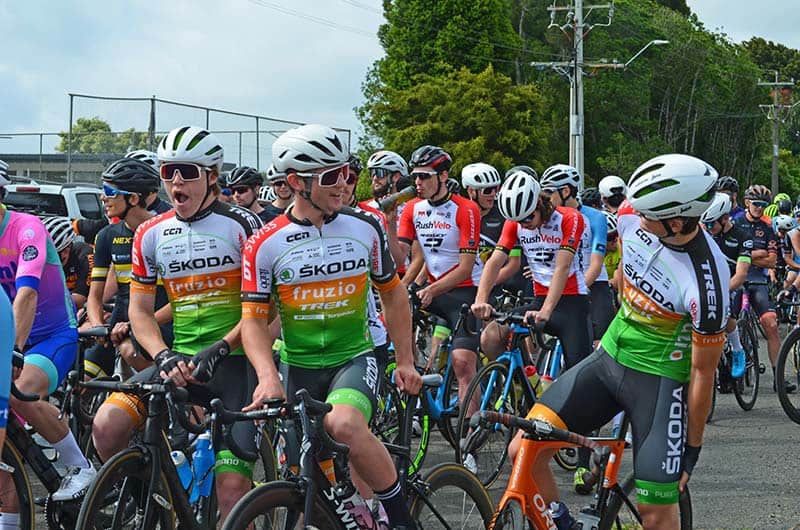 The hill-top finish line of the Onewhero course always produces a stunning climax to the racing there, and Race Four of the 2020/21 Team Championship, the Grassroots Trust Onewhero Classic, delivered yet again. Although outnumbered in the break, Henrietta Christie and Annamarie Lipp of the Velo Project team cleverly took a 1-2 in the Elite Women race, while Regan Gough (Livingston Building Excellence WBOP Performance Hub) produced an epic last kilometre effort to steal the win away from Greig McDonnell of the Cabjaks-Castelli custom squad in the Elite Men race.

With the twist and turns of the rolling course that seemed to consistently find either a crosswind or a headwind, once again it was the early breaks that formed the day’s racing in both Elite Men and Elite Women’s races. After some initial testing of the waters by the likes of the Tank Guy squad, the Elite Women race blew apart after only 10km of their 57km route. Turning into a crosswind, a group of five put the hammer down, creating numerous splits behind, the group eventually forming into a bunch of fifteen that continued to gap any chasers. With most of the top teams represented (Tank Guy, Velo Project, Cabjaks-Castelli Custom, and both Auckland and WBOP Performance Hubs) their gap continued to increase, working well together until the Kohanga Road climb at 32km, where a small group of five gapped the rest.

“It’s what we came here to do,” explained race winner Christie, “so we are pretty stoked about it! I was feeling a bit rough at the bottom but came back a bit at the top, it was definitely a tough one.”

“It was to try and drop anyone that maybe swinging at the back a little bit and to soften them up for the sprint,” said Lipp of her attacks, “or to get away if possible, but everyone had good legs today. They were leading up the hill, so all we had to do was to bide our time and not go to early in case we blew ourselves up.”

Despite not getting the win, the day was not wasted for Cabjaks-Castelli Custom, as 3rd placed Thorpe explained; “All three of us are triathletes, so for us there was a day of learning today. We only had four girls starting, for three of us to finish in the top 5, well, that’s pretty epic.”

The points gained from the win elevated Christie into the Individual lead one point head of Lipp, and with her Velo Project team playing their ‘Joker’ this round they now have a 22 point lead in the Team Championship.

An attack after just 17km by Karl Poole (NZ Cycling Project) instigated the break of the day in the Elite Men race. Bridged initially by James Harvey (Spoken Cycles) the group grew quickly to 12, which was whittled down to 8 after some solid driving from Team Skoda Fruzio’s Joel Yates over the climbs. With most of the teams represented in the break, the bunch buttoned off slightly, their gap holding.

Aiming for a buffer before the climb, Regan Gough (Livingston Building Excellence WBOP Performance Hub) attacked away from the break with 15km to go, but the group worked well to rein him back, the catch just as they turned into the base of the final climb.

Yates held court on the early steep part of the climb, shedding the group further, then, with 3km to go, Greig McDonnell (Cabjaks-Castelli) launched, gaining 100m on the chasers. Gough had other plans for the finale though, leaving the chase group within the final kilometre and surging across to McDonnell, rolling him just before finish line to take the win.

“I thought I’d go early, thought I might get a gap,” recalled McDonnell, “I was looking back but I honestly did not see him at all, I thought I had it. Coming into the finishing straight was the first time I noticed he was right on my shoulder, and he came past me very easily. I was pretty gutted to be honest. It’s a wee bit disappointing, but second place, I’m still pretty happy with that.”

“Yeah, it wasn’t the brightest idea,“ laughed Gough of his initial failed attack, “but the climb wasn’t as hard as I thought it was going to be. It suits me as you can punch and recover and punch again. It was a last-ditch effort with a k to go to try and get over to him [McDonnell], he rode incredibly well so I kind of felt a bit stink when I went past him.”

“I thought Joel [Yates] would cruise it,” admitted 3rd placed Harvey, “he was easily the ‘man of the match’. It was pretty tough the whole day with this wind, so hard along the bottom section into the headwind. Every time up that climb Yates lightened the group up a little bit, it was always a grovel up there. When Reggie [Gough] went full gas out of the bunch with a k to go, there was no way you were getting onto a guy with that much pace!”

Although admitting he had ‘no legs today’, Nick Kergozou (Team Central Roofing / Revolution Cycling) holds onto his Individual lead going into the Christmas break, just four points ahead of Black Spoke Pro Cycling Academy’s Kiaan Watts. Spoken Cycles, who played their ‘Joker’ this round, are now 10 points ahead of Kergozou’s Central Roofing / Revolution Cycling in the Team Championship.

Glen Carabine finished solo in the Cat. 2 race, ahead of CYCO Unleashed’s James Barnes and Max Preece of the Crown Global Security – Orange team. Barnes leads the Individual competition while Burnsco BSR Black Spoke Racing are 8 points ahead of CYCO Unleased in the Teams table.

Daniel Holt-Pederson of the Burnsco BSR Black squad extended his Individual lead in the Cat.3 race, his solo win resulting in a 19 point gap over Andrew Weatherly (Mike Greer Homes Waikato); the CRM squad 23 points ahead of Team NVOKE.

Velolab / Valley Toyota / Image Glass rider Kallum Mardon was the first to the top of the hill in the Cat. 4 race, pipping Signature Homes Racing’s Craig Burke on the line. Elijah May (Taupo Cycling Club) filled the podium and is just one point ahead of Mardon in the Individual competition. Burke’s Signature Homes Racing squad top the table, 5 points ahead of McKenzie and Co.

The teams do battle again on the 24th January, details of the location a mystery until the week of the race. With just two rounds left the points tables are still close, so there’s plenty still to fight for across all of the categories.

For a full list of results and an overall points tally so far, head over to Dynamoevents.co.nz.