Down to the wire Tokoroa Finale 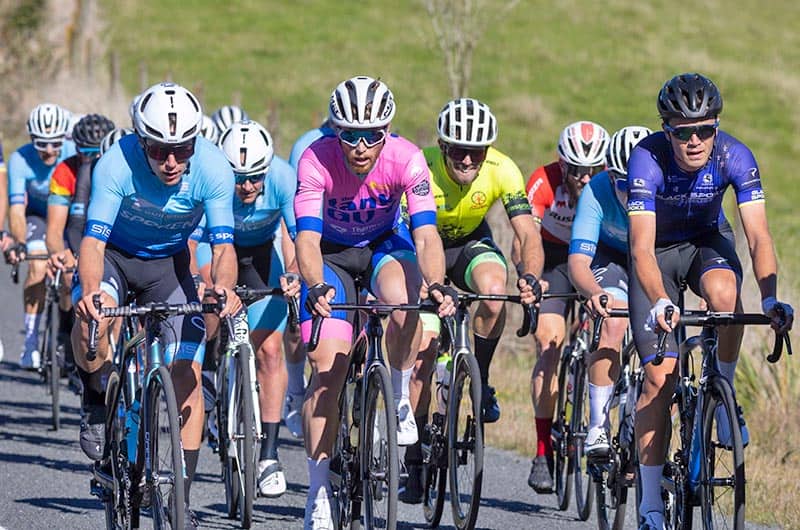 Down to the wire Tokoroa Finale

With the overall points tables so close after the five rounds of the Grassroots Trust Team Championship 20/21, the riders found themselves lining up for the final race in Tokoroa with it all to ride for. What transpired was tactical and exciting racing across all categories, producing a dramatic finale to the Championship.

Attacked from all sides and despite a heroic fight, Nick Kergozou (Central Roofing / Revolution Cycling) was reluctantly forced to release his series long lead in Category 1 to Corbin Strong (Spoken Cycles) after a highly tactical race, while Kate McCarthy managed to fend off all challengers to the win the Elite Women race, thus securing her Overall title.

As soon as the Category 1 race rolled out of neutral the tone of the day was set by a huge increase in pace, Cabjaks-Castelli Custom rider Corby Price testing his legs and finally escaping, eventually joined by four others. Alex Heaney (Spoken Cycles), Ben Hamilton (Cabjaks-Castelli Custom), Matthew Wilson (RushVelo-Ridley) and Boris Clark (Tank Guy) worked well with Price, and by 12km of the 94km race they had a solid 40 seconds on the peloton.

With riders getting spat backwards from the main bunch, it was clear the pace was on, Kergozou and his squad policing stabs instigated by 2nd placed Kiaan Watts (Black Spoke Pro Cycling Academy) and 3rd placed Corbin Strong (Spoken Cycles).

At 30km it snapped, Watts and Strong managing to edge away with George Jackson (NZ Cycling Project), despite Kergozou pulling massive turns in the chase. Seeing the move heading up the road, Mark Stewart and Regan Gough of the Livingstone Building Excellence WBOP Performance Hub team took off and caught the Watts/Strong group; behind them the bunch was detonating.

By just 40km into the race the lead group of five had 20 seconds over the chasing group of five, Kergozou still dragging the remains of the bunch, now at 40 seconds.

10km further the two lead groups merged, Kergozou still just 45 seconds back, but then the ten worked well together and with Strong and Watt’s teammates disrupting Kergozou’s squad’s chase, the lead group started to wedge a distance from the peloton.

With 25km to go, Mark Stewart, Race 5 winner, launched, Heaney digging deep to grab his wheel, and within 8km they had 30 seconds on the group of 8.

The chasers were still putting the squeeze on though, the two Cabjaks-Castelli Custom riders dropped over the climbs, the Kergozou group now 1:40 back. With 10km to go Watts failed to hold the pace, dropping from group 2, Strong now best placed to profit from the original move.

With this in mind, Strong and Gough attacked from the chasers with 7km to go, and quickly started to eat into Stewart and Heaney’s advantage. Getting within 10 seconds of them they ran out of road, Stewart out galloping Heaney to take back-to-back Dynamo wins, Strong edging Gough for 3rd place to take valuable points.

All eyes now looking back down the road for Watts and Kergozou. Watts’ teammate, Aaron Gate, picking him up on the way through to help him finish 11th , an exhausted Kergozou still taking the bunch sprint for 12th. Eventually the results were calculated, Corbin Strong nabbing enough points to take the Overall lead with Strong’s Spoken Cycles team also taking the top spot. Mark Stewart’s race win elevated him to 2nd Overall, a gutted Kergozou taking some consolation on the final podium step.

“When I saw Corbin and Kiaan go I attacked solo,” recalled Kergozou afterwards, “but got brought back by Spoken, so I just sat on the front drilling it, probably for too long. When Regan and Mark attacked my legs were gone, and after that it was just an hour and half of chopping it out with three of us at the front.

“We had a really good series with the Central Roofing team though, just down in numbers with this one but gave it everything we had.”

“It was good fun!” smiled Stewart, “it wasn’t just ‘here’s a hill and we’ll see who is the strongest’, it was all about tactics, timing and opportunity – it was racing at its best.”

“Everyone just let him go,” said Heaney of Stewart’s attack, “but I was thinking he’s probably too good to let go so I followed him. Next thing I was breathing out my ears and realizing it was a bad idea!”

“I thought I had the sprint, I’d left him on the front for the last 1 ½ k, so thought I could get the jump on him, but I was looking right at him and he still got the jump on me!”

“It was a really hard day and everyone raced really well,“ said Corbin in his Winners jersey. “Kudos to Nick Kergozou as he’s led this series the whole way through and he did a real gutsy ride today, but he obviously had a big target on his back.” Strong was also praising others too; “Mark Stewart did a really good ride, he was definitely the most strongest and most deserved winner today. Kiaan (Watts) too, he is riding really strong and heading over to Europe now, so it’s great we have events like the Dynamo series to help prepare riders for overseas racing.”

Another rider with a target on their back was Elite Women leader Kate McCarthy (Cabjaks-Castelli Custom), their reduced field integrated into the Cat.4 race for the 65km rolling South Waikato route.

With the strong Velo Project squad filling the rest of the Top 5 in the points table, McCarthy’s plan was to attack to secure victory, however every time she moved she was shadowed by a Velo Project jersey. Marking each other closely, the race came down to a bunch sprint, McCarthy dodging a late crash and edging out Ally Wollaston (Velo Project) for the race win. The additional points securing the Overall Individual title for McCarthy, Velo Project sweeping up the Overall Team prize.

“We basically had Annamarie (Lipp) sat on her wheel the whole time,” explained 3rd placed Kirsty McCallum, “we marked her and we marked her teammates. Kate was very strong, she was very impressive. We just stayed at the front and tried to not let Kate get away. She tried a few times though!”

“I noticed Annamaire was on my wheel for the first half of the race and I was on hers for the second half of the race, so we were definitely watching each other!” laughed McCarthy at prize giving.

“I’m stoked, as I think I got second to Kirsty last year, so I’m really happy with this.
After Nationals I wanted a break, but knowing the points were so close it made it easier to keep focus and keep training.”

Although mathematically possible to beat, Seana Gray’s previous three wins put the Hot Gossip Bra Shop rider in a good position for the final round in the Open Women category, and, as expected, it was Team Body Performance Clinic’s Amanda Till who would be her greatest challenger. The two soloing away from the rest of the field with Gray taking the line honours ahead of Till to confirm her Overall Individual title, Tegan Feringa (HIREACE Lightening Bolts) bringing the rest home. Till’s Body Performance squad didn’t go home empty handed though, winning the Overall Team prize.

Although Andrew Feringa (HIREACE Wheel Deal) outsprinted Ashley Paice (E G Whiter) to win the Category 5 race, it was Paice that held on enough points to take the Overall Individual title over Feringa. Alex Colquhoun (Forestland Wheelers) got 3rd in the day’s sprint while 5th placed Lapo Nustrini (ibuilt) earned 3rd in the Overall standings. The winners of the Overall Team prize were the Four Seasons / Otorohanga Collision Repairs squad.

A big thank you must go to all the riders who took part in the 20/21 event, and a big shout out to all the family, friends and volunteers who help make this event what it is.

Please keep an eye out for announcements regarding the 21/22 Team Championship, which promise a few exciting changes to the existing race structure.

For a full list of the results from the entire Championship please head to Dynamoevents.co.nz.