White gets revenge and Ray continues her winning form 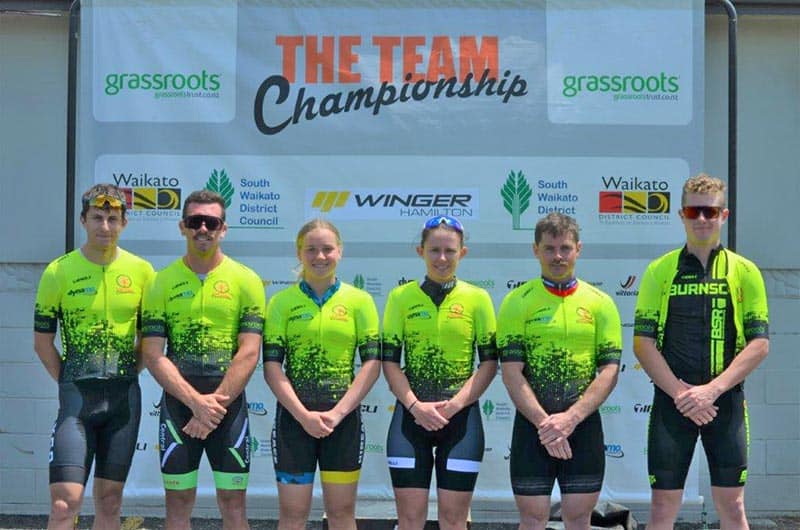 White gets revenge and Ray continues her winning form

The rolling hills of Ngaruawahia produced splits and breaks across all of the categories in Race Three of the Grassroots Trust 2020/21 Team Championship, the Waikato District Council Grand Prix. In both Elite races, early breaks proved to be the tactic of the day, with Xander White (Black Spoke Pro Cycling Academy) and Olivia Ray (Cabjaks-Castelli Custom) winning from small groups that had been away for a majority of the race.

After a couple of early skirmishes in the 95km Elite Men race, it was a break of four that quickly established a gap of 20 seconds by the 20km mark. Xander White was joined by the Spoken Cycles duo of Michael Torckler and Callum Nesbit, and Team Central Roofing / Revolution Cycling’s Ryan Christensen. By 40km their lead had built to two minutes, the four working well against the 20degree heat and blustery winds. Behind them the bunch was active too, with Race Leader Nick Kergozou and his Team Central Roofing / Revolution Cycling squad marking any attempts by others to escape up to the break.

On the ascent of the last climb White attacked on the left-hand side, forcing Torckler and Nisbet to chase. Christensen counterattacked to bridge the gap, followed closely by Torckler, Nisbet dropping away. The three continued the pace, Torckler jumping at every opportunity to distance his breakaway companions, all the time brought back by either White or Christensen.

Coming into the finish it was White that took control and jumped early, holding off Christensen all the way to the line.

“At 30km I knew I had to get rid of Nesbit, just to make sure it was an even fist fight,“ beamed White at the finish line, his salt-stained Black Spoke jersey showing the efforts from a long day. “I find it easier to race from the front, it’s a game of who breaks first then. I had unfinished business on this course, a year or two ago it was the same thing, a three-man break, but I ended up losing to Campbell Stewart. I know this course now, I knew how to swing around those final corners, so I led it out.”

“My advantage was that I knew the course, “ explained Christensen, “where to go and how to save energy. We knew we had to do something to distance one of the Spoken guys so they didn’t get an advantage in the Team classement. Xander went first and I was lucky to get across. It was a struggle, but it was good racing.”

“I wasn’t really expecting us to stay clear,” admitted Torckler, “there was a lot of firepower sitting back in that peloton but we never saw them. I had a fair bit of cramp setting in, which wasn’t ideal, and I haven’t done much in anger since the Nationals, so it was a good way to get back into things.”

Taking the bunch sprint Nick Kergozou successfully defended his Individual lead going into the next round, while the work of Torckler and Nesbit ensured Spoken Cycles lead the Teams contest.

In the Elite Women race it was the eventual race winner that instigated the day’s break. Newly crowned National Criterium Champion Olivia Ray testing the waters early on, only to be joined by her Cabjaks-Castelli Custom teammate Kate McCarthy, with Henrietta Christie (Velo Project) and Stella Nightingale (Tank Guy) bolstering the group. Each pulling their weight, their advantage back to the chasing group was over seven minutes by the second lap. This effort took its toll on Nightingale, not able to match the other three over the final climb.

This left Christie outnumbered by the Cabjaks-Castelli Custom duo going into the finale, Ray and McCarthy working her over to secure a 1-2 on the line.

“Sightly after 20k’s I attacked, but only just to see whether to see if going solo or making a break was worth it,” laughed Ray post-race, “but it was too windy so I thought I’d just sit up, but then Kate came and two others came along, and that was it! The fact that we had two of us worked really well.”

“That’s what we wanted, “continued McCarthy, “we played our Joker this round so we wanted a few up the front, so it was perfect, especially knowing that Olivia is a good sprinter.” With her 2nd place, McCarthy took the lead in the Individual category; “To be honest I wanted to win this round because it’s a local course, but to have Olivia win and me come second and take the jersey, well, that’s not a bad day at all!”

“I was at a disadvantage as they could work really well together,” acknowledged Christie, “and I had to be careful because if one of them attacked the other wouldn’t chase. I’m not much of sprinter, but I gave it my all.”

With Christie’s teammates Georgia Danford and Annamarie Lipp taking a 1-2 in the bunch sprint, her efforts were rewarded with their Velo Project squad continuing thier lead in the Teams classification.

The Cat.3 race was a solo win by Johan Hakkenbroek (Team NVOKE), coming in just ahead of Daniel Holt-Pederson (Burnsco BSR Black) and Michael Leaf (CRM). Holt-Pederson takes over the Individual lead, while Leaf’s CRM team hold on to their top place in the Team’s table.

Cat.4 Series Leader Elijah May (Taupo Cycling club) took the sprint in a three-rider break, edging out Kallum Mardon (Velolab Valley Toyota Image Glass) and Craig Burke (Signature homes Racing) to the line, with the McKenzie and Co squad jumping ahead of BDO Auckland in the Team points competition.

E G Whiter’s Ashley Paice nabbed the group sprint in the Cat.5 race, with Glen Lewis (Men on Bikes / Storerite Logistics) and Sebastian Kamp (Ibuilt) taking 2nd and 3rd. Forestland Wheelers hold on to their lead in the Teams table, while HIREACE Wheel Deal’s Andrew Feringa’s Individual lead is down to just one point over Lewis.

The next round is to be held on the 13th December, the Grassroots Trust Onewhero Classic. Always producing a memorable finish, the Category 1 riders will compete over a 97km race which boasts 1333 metres of climbing, the Cat.2 and 3’s a 73.8km 972m course and Cat.4, 5 and Open Women a 57km 749m version.

Racing starts at 10:00am, for more information about the next round and a full list of results and overall points ranking of each of the categories so far head over to Dynamoevents.co.nz