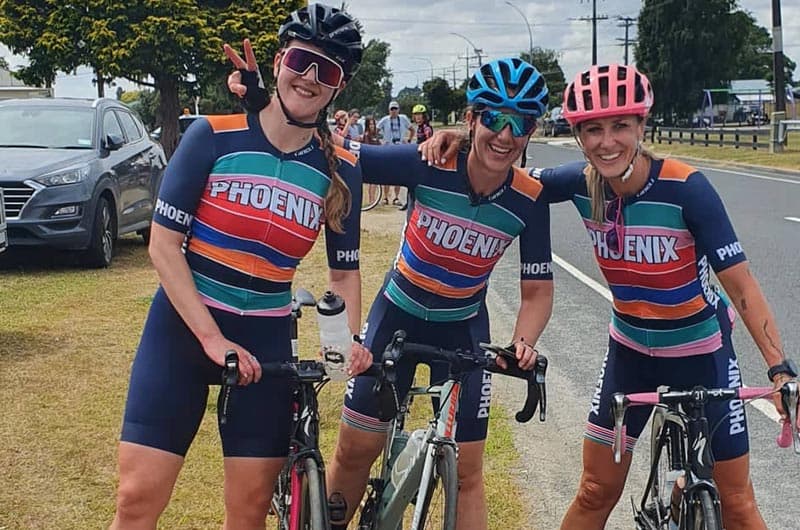 Squeezing both Round 2 and Round 3 into the same weekend was always going to add an additional test to the riders, but then throwing in some scorching temperatures in the mix together with the new addition of track racing resulted in two days of sizzling Grassroots Trust Team Championship racing.

The weekend started with the Te Awamutu Grand Prix, with all categories heading out from the Te Awamutu Velodrome for a quick rolling 47km loop skirting past Pirongia. Focusing on the Cat.5 race for this round, the pace was hot as soon as the flag was down, with a group of 10 squeezing off the front after 23km. The bunch brought that back while Speed Theory’s Sam Fraser kept testing the waters every time the road had the slightest rise. With 12km to go Race Leader Andrew Reeves (Burnsco BSR Black) attacked, and with Fraser on his wheel the two decided to go for it. Their gap expanded quickly to nearly a minute on the bunch, the two staying away all the way home. Fraser led it out coming into to Te Awamutu, Reeves getting the better of him by the line.

“I was actually expecting it to come down to a bunch kick,” explained Reeves, “and the Burnsco team did really well to chase down any early breakaways. I’d seen from the start that he was strong [Fraser], so when I gave it a bit of welly on the climb and he was with me I thought I may as well put my head down, thinking at the very least I’d come 2nd.”

Backing up his road race win from Round 1, Reeves extended his Cat. 5 Individual Lead. Another racking up points was Penny Pawson (Cabjaks-Castelli) in the Open Women category, taking the sprint from a group of 15 to extend her Individual Lead.

George Jackson (MitoQ NZ Cycling Project) confirmed his reputation as one of the fastest sprinters of the NZ road scene by taking the Cat.1 race ahead of Kiaan Watts (Revolution Cycling) and James Harvey (Spoken Cycles), Harvey equaling points with teammate Mark Stewart for the Leaders Jersey.

The success continued for Spoken Cycles with Daniel Barnett and Nathan Bunn taking the top two steps of the podium in the Cat.2 race, Finnegan Murphy (Total Orthodontics CNP) just edged out.

BACK TO THE TRACK

After a quick break, the afternoon developed into a carnival vibe, with each of the teams nominating riders to fight out 10 lap heats on the TA track. A new format to the Team Championship, it was a new style of racing for some, for others it was old hat. With riders and spectators cheering noisily from the stands it proved a popular alternative.

Andrew Reeves (Burnsco BSR Black) backed up the morning race by delivering in the afternoon too, catching Hamilton City Cycling Club’s Rick Day-Mesure right on the line with Forestland Wheeler Quinn Dixon 3rd in the Cat. 5 final to extend his points lead.

Unbeaten in the series, Pawson was beaming at the finish; “The track certainly made it interesting, I really enjoyed it and it was a great change. This is a fantastic track to race on for this and I’d love to see more of it.”

Continuing the weekend, the riders faced the Waikato District Council Classic next, along the testing rolling countryside around Ngaruawahia. The Open Women and Cat.5 riders raced the 50.5km loop, while rest were challenged on the 87.9km course, boasting an honest 1104m of climbing.

Cat.2 Race Leader Nathan Bunn (Spoken Cycles) was out to defend his lead after placing 2nd in the first two road races and winning Round 2’s track race, which put him 13 points ahead of teammate Daniel Barnett.

As soon as the bunch turned inland from the Waikato River the pace lifted, riders from Tank Guy and CYCO keen to instigate some action, with Spoken Cycles riders always near the front to keep guard. Thermal Chemistry were keen to provoke others too, chasing down early challenges from CYCO and CRM and keeping the pace hot.

As the bunch hit the first set of climbs the race exploded, ripped into small groups all over the road, with a group of three escaping off the front. This group evolved, although Bunn was now off the pace and forced to chase in the third group on the road.

Barnes gave it a nudge on the climb at 68km, splitting the group into four up front (Smart, Barnes, Murphy and Officer) with seven chasers. The pace was on, the chasing group now down to three, but when Barnes was slowed at 81km with a mechanical, the chasing group was in sight. Another 2km on and the catch was made, and with 5km to go the lead group was now six; Strong (FORMiS), Carter (Tank Guy), Hancock (Thermal Chemistry) had fought up to catch Murphy (Total Orthodontics CNP), Smart (CYCO) and Johnstone (Nu-Klear Demister Racing); Carter dropped just before the run in.

As the sprint started the five were wide across their lane, Johnstone with the best gallop, Smart 2nd and Murphy 3rd.

“The course had lots of climbing, so that suited me,” smiled Connor Johnstone (Nu-Klear Demister Racing) afterwards, “once it hit that first hill it all blew to pieces, so I made sure I was near the front. I didn’t actually think I was going to go so good in the sprint but all of a sudden a gap opened up on the inside of Arron Strong and I came through.”

Despite not scoring this race, Nathan Bunn (Spoken Cycles) retained the Cat. 2 Individual Lead; “Yeah, not the greatest race for me. I had pretty tired legs from yesterday’s racing, but we’ll come back and race Round 4 and try again.”

Drama in the Cat.1 race saw a disqualification of the whole Spoken Cycles team after one of their riders breached the centre line during the final sprint, resulting in Hayden McCormick (MitoQ NZ Cycling Project) being rewarded the win, with Dan Gardner (Revolution Cycling) and George Jackson (MitoQ NZ Cycling Project) filling the podium. This 3rd place, together with his two wins from Round 2, elevated Jackson into the Individual Lead, with the Spoken Cycles duo of James Harvey and Mark Stewart just two points behind. Indeed, Spoken Cycles still lead the Cat.1, Cat. 2 and Cat.3 Team tables.

After a short break, the Grassroots Trust Team Championship continues on the 6th March in Pirongia, spicing things up further with a 6km 200m bunch hill climb race in the morning, followed by a bumpy ‘Limeworks’ loop road race in the afternoon. Neither race for the faint hearted, so yet again we can expect fireworks.

For more information on the upcoming rounds and for a full list of results head to Dynamoevents.co.nz.