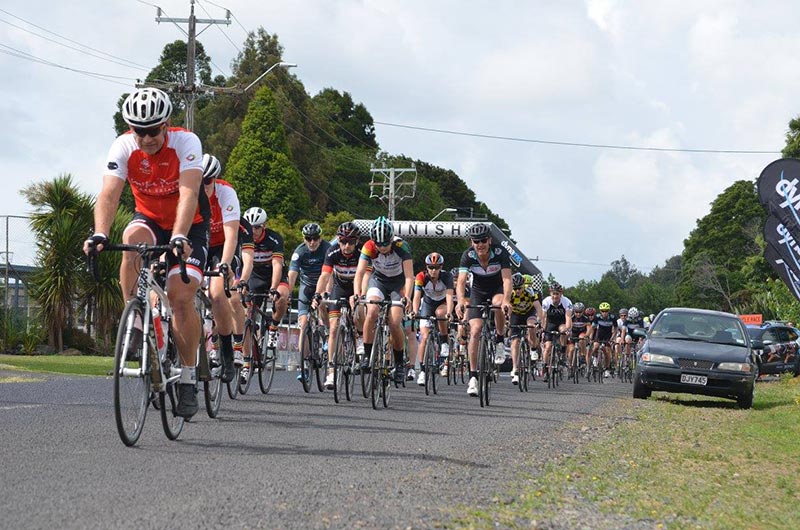 The tough final climb up to the Onewhero finish line decided both the Elite Men’s and Open Women’s grades in Sundays fourth race of the Grassroots Trust Team Championship series. Both Ryan Christensen of the CrediFlex Pro4mance team and Team St. Marks Brest Centre’s Tanya Sharp produced identical attacks at the base of the climb, the two holding on for impressive solo victories.

Always keen to animate the racing and often the instigator of the winning moves, Christensen has been unlucky in the finales of the previous three races, however his present form and tactical knowledge combined with the days weather conditions and the demanding Onewhero circuit finally produced the win he’s been fighting for all Series.

Making the early breakaway of five, Christensen was joined by Oliver Young of CCN Factory Racing, Rotorua Racing’s Daniel Johnston, Logan Griffin of Spoken Coaching and Cameron Wynniatt of the Blindz Direct team; Wynniatt policing the break for his teammate and Series Leader Michael Torckler. The pace and the climbs of the course splintered the chasing peloton as the break quickly established a gap of over two minutes, Torckler keeping a close eye on his nearest rivals, nulling any attacks they threatened. Lap after lap saw more riders spat out the back, Torckler’s group eventually dwindling to just six riders going into last 20km of the 104km race as the gap up to the break finally started to come down.

Seizing his moment, Christensen attacked during this last lap, closely marked by Wynniatt, the two teaming up to stay away from their breakaway compatriots as they headed towards the final climb. Meanwhile, Torckler attacked out of his group and was starting to catch the remains of the break as they dragged themselves up to the finishline. Wynniatt was eventually dropped by Christensen, the CrediFlex Pro4mance rider finishing just 11 seconds ahead of Torckler, who had stormed up the climb to squeeze onto the podium ahead of 3rd placed Wynniatt.

“There was no place to hide out there,” said Christensen post-race, “the wind played a massive factor and really split the bunch. I knew I probably has the better legs towards the finish but it’s a ten-minute climb so it was touch and go towards the end. I knew I just had to hold off Torckler.”

While Spoken Coaching equal Team Skoda Racing in Team Points, Blindz Direct’s Torckler increased his points as Series Leader; “I was happy with how it played out in the end there. I always want to win but it was good to get Cam up on the podium and extend the lead. It was a good day for us.”

Back to back wins for Tanya Sharp have also extended her lead as Series Leader in the Open Women’s category, a solo attack pretty much from the gun last race, this time following an attack by CNZ Junior Black’s Charli Herbert then working well with the youngster before attacking her on the run in. “During the first lap the bunch was working together quite nicely although it was a quick pace,” explained Herbert, “and on the first big hill we went hard and I attacked, pushing the bunch. Tanya got on my wheel and we rode nice and evenly from there, but when we got to that final hill she obviously still had a lot left in her legs.”

”Yes, a very different race today,“ said Sharp, comparing her two wins, “I just pushed hard on the that very first bit of the last hill hoping to get a gap on her, and when I turned around she wasn’t there anymore so I just pushed it hard all the way to the finish. It still felt like quite a long way though, even from the 1km to go flag it seemed like a long way to go!”

Maddi Douglas (CNZ Junior White) together with Amelia Matthews and Courtney King (CNZ Junior Black) managed to distance the rest of the bunch on the run in, Douglas nabbing the last spot on the podium, Matthews and King earning valuable points to reduce lead that the CNZ Junior Hub squad have, CNZ Junior White running a close second going into the next round.

All the teams go head to head again in the next round of the Team Championship, returning to Tokoroa on Sunday 4th February. Although only two races left in the series, the lead in most of the categories is very close so there’s still plenty to race for.

For more information on the next race and a full list of the results from each of the rounds so far head over to the Team Championship webpage.