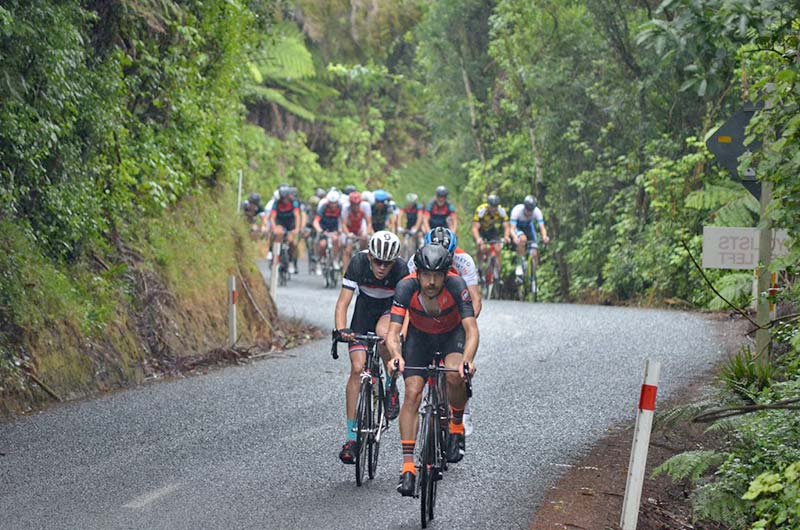 Intelligent tactics and strength in numbers came in to play for the last race in the Grassroots Trust Team Championship series, Michael Torckler of the Blindz Direct team sealing his Series Lead, his teammates controlling the race and earning vital points to take the Teams Award. Meanwhile Series Leader of the Open Women’s category, Tanya Sharp of Team St. Marks Breast Centre, yet again showed her dominance by another triumphant solo effort.

Held on the brutal Tamahere course that includes the infamous Maungakawa climb, the riders were also battling against the wet and wild weather conditions, these factors combined splintered all of the races.

With Torckler’s well known climbing ability expected to be unleashed on Maungakawa, all eyes were on the Series Leader, however his team cleverly put three riders in the early break of nine to force the others to focus on the chase. Twice over the climb diminished numbers in both the break and the field, leading to a four against four race finale. Blindz Direct’s Jason Thomason led out teammate Steve Lampier to take the line honours, with Torckler coming in just over 30 seconds later in the chasing group.

“I finally got a victory,“ beamed Lampier at the finishline. “Yeah, the plan was to get as many riders in the front before the climb so we had numbers, which we did very well, and then after the climb we just jammed it. We rode quite well with Alex (Heaney – Spoken Coaching), he was pretty strong, Jason was also doing big turns too. I’m not a mega sprinter but Alex went after the roundabout near the finish and somehow I got over him.”

After the points had been counted in the Teams Award it was a dead heat between three. Team Skoda Racing, Spoken Coaching and Blindz Direct all on 82 points, highlighting the equality of the field. Points scored in the final round gave Blindz Direct the win in the six race six-month long series, something Team Manager Stu Thomason was delighted about.

“We battled a little bit with illness and injury, which had dropped us a couple of places, but obviously the last two rounds we’ve had some solid rides and I think we’ve really showed our strength and stamina. It is awesome to have three teams equal at the end of the series, and for it to come down to the wire and everyone really fighting for it. In the end we came up with the goods. This really is the best domestic race in New Zealand as far as we’re concerned.”

Stu’s Blindz Direct Series Leader Michael Torckler was a relieved but happy man to be on the top step of the podium; “It’s been another good Series, the Dynamo races are always good fun and held on exciting courses. Today was such a nice way to finish off the summer.”

Similar tactics were deployed by the St. Marks Breast Centre team in the Open Women’s category, Series Leader Tanya Sharp sending teammate Robyn Marchant up the road in an early break to deflect focus. However, with the break pulled back just before Maungakawa, everyone was waiting for the inevitable launch by Sharp on the climb.

“We all knew it was coming,” explained Sharp afterwards, “I was on the front so pushed quite hard from the bottom and then had to just suck it up at the top as I was with two of the Rapha girls, Anne-Marie (Guiney) and Dayna (Haythorne).” Disaster struck Haythorne as the three crested the climb, a puncture requiring her to wait until after the bunch had passed before finally getting a spare wheel, leaving Rapha Cycle Club’s Anne-Marie Guiney to chase Sharp solo; “It was in that moment of indecision as to whether I was going to stop and help Dayna that Tanya gained a few bike lengths and after that she was gone. It was a separate 40km time trial then, with me pinching myself just looking over my shoulder thinking ‘I hope that the bunch has forgotten about me as that’s the only way I’m going to make it!”

The race was not over for Rapha Cycle Club’s Haythorne though, chasing back to the bunch she also managed to win the sprint for third place ahead of Cycling New Zealand’s Claudia Vanner, the young Cycling New Zealand squads (Junior White, Junior Hub and Junior Black) taking the top three spots in the Teams Award.

Series Leader Sharp was overjoyed at the finish; “It’s been such a great series, I’ve really enjoyed it. I’ve raced with a lovely bunch of girls and made some new friends.”

Equally, across all of the categories no one was shying away from grabbing those last race winning points. Ronan Avery and Paul Duynhoven continuing the Blindz Direct team success with a one-two podium in the Cat 2 race, while Series Leader Aaron Strong of Burnsco Black Spoke Racing kept Team GMC/Thermal Solutions rider Stuart Holder at bay to nab the Overall, Burnsco Black Spoke taking the Team Points win too.

The consolation for Mt Eden Cycles / Promapp riders Benedict Burgess and Matteo Garbagnati was that their 4th and 2nd place points added towards sealing the Teams Award, while race winner Nathan Bell confirmed his Overall Series Leader’s jersey in the Cat 4 race.

Three riders in the top five boosted Croucher Brewing Co Cycling team’s lead in the Cat 4b race, with Croucher’s Neil McConalogue taking the race win ahead of Mark Taylor and Overall Points Winner Barry Pritchard of the Taupo Cycle Club team.
The Croucher team was formed especially for the Dynamo series when the race was first launched in 2015, Team Manager Anthony McKenna finding like-minded riders and sourcing sponsors to compete; “Yes, this is the third season we’ve done it now. We’re not a young team, pretty much all 30 upwards, and we get older every year, but it’s getting better every year too. This time it was quite different as we lost our strongest rider to injury, so we also targeted the Teams prize and we ended up with the win!”
This sentiment is something that Amanda Banks of the Velo Femme team (one of the four Velo Workshop backed teams) agrees with; “We are no means the best team in the results but we are having a blast and we’ve got women who are learning cool stuff about themselves. We’ve got lots of Mums in the team, from all sorts of backgrounds too, so often training fits around childcare and all the running around. We know that we are never going to get called up to the Olympics or make the Commonwealth Games but for the women in our team it’s about the personal challenge that you get from riding and racing a bike, and it’s just really cool watching other team members progress.”
“Dynamo runs some fantastic events, and we are really appreciative to all the people that make it possible and safe for us to go and race. They have a great team of volunteers in the background, the marshals, everyone. We’ve got some great sponsors too, Universal Underground, Velo Workshop, Sugar Bowl café, Right Click Training and the Perry foundation, we know dollars are stretched so we really appreciate them supporting Women’s cycling.