Day Two of the 2014 Wellington to Auckland 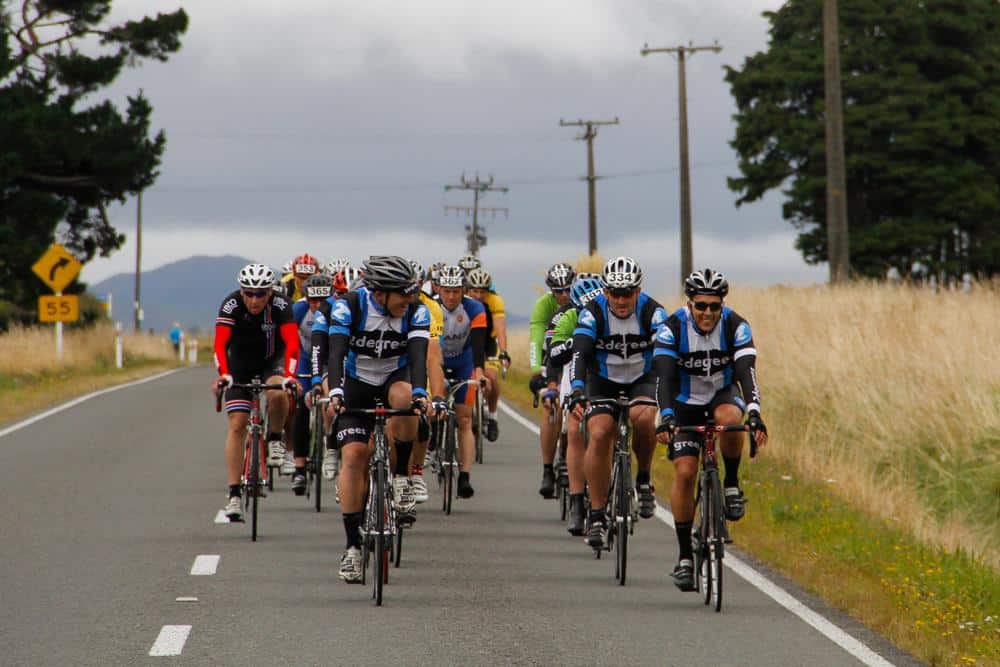 Day Two of the 2014 Wellington to Auckland

Day two of the BDO Wellington to Auckland Challenge threw up more average weather and two stages from Masterton to Palmerston North, via Pahiatua.

Despite the rain and the cold, the wind was at least behind us as we made our way up the valley towards Pahiatua on a 75km stage. I decided the morning was to be one of rest for me after pushing pretty hard on day one, so I sat back with one of the groups ticking over at around 29/30kph and enjoyed the scenery (what we could see in the mist).

This is one of the benefits of this BDO W2A, you can soon find a group to suit the pace you want to go at during the day. As we headed over a few hills (nothing major) I found myself riding with Cyril Hibberd. Cyril is an amazing bloke but does have written on his race number ‘DEAF’ so people know to shout at him if you want a chat! This made for the rather comical sight and sound I’m sure to any farmers we passed of two cyclists riding side by side about a foot apart, shouting at each other!

I hit the final hill into Pahiatua and promptly cramped, Cyril rode away up the hill, I regained my composure and some power and Cyril waited for me at the top so we could hit the line together (not far down the other side.

This afternoon was a short but brutal ride, just under 40km but over the Pahiatua Track to Palmerston North. This is a 3km climb and a steep one too. Given my rest in the morning, I had a crack at this and was with the lead group in my Group 3 category at the bottom – that is all apart from Geoff Crawford who had made a move on the flat.

By the top I was around 8th but then proceed to catch everyone bar two (Geoff won the stage) to finish 3rd in Group 3.

The weather had started to improve and the signs are good for the next few days as we head to Wanganui (via Hunterville) and then Ohakune (via Kakatahi School), albeit with westerly winds forecast.

Thanks to the daily massage, good nutrition and hydration and some sensible riding on my Avanti Cadent (which is flying) I am OK at this stage of the BDO, better than last year. But tomorrow is tough, arguably the toughest on the W2A so I will reserve judgement until I reach Wanganui!