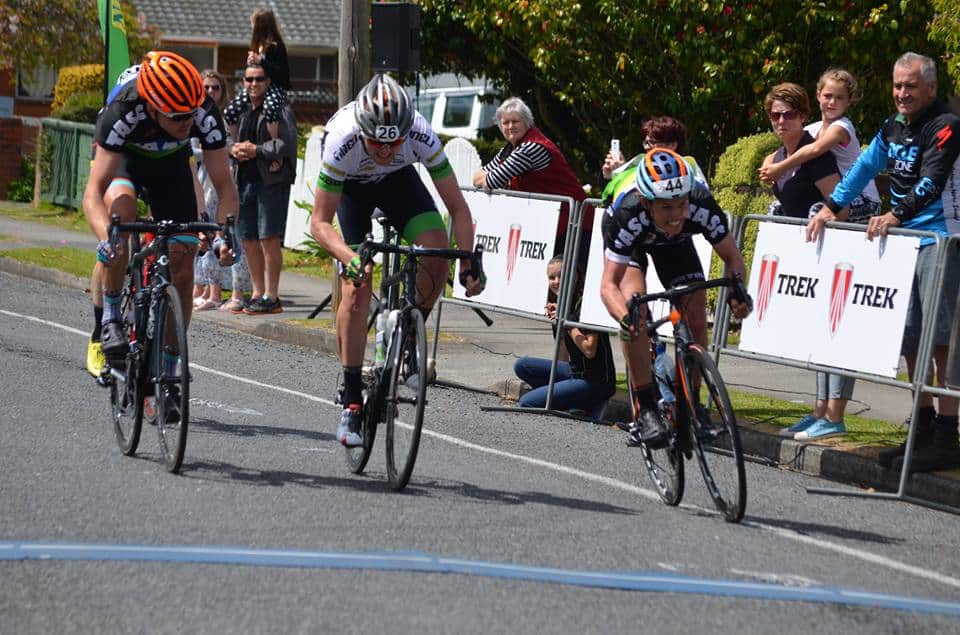 The first round of the Team Championship presented by Dynamo Events saw Frank Sutton take a narrow sprint win in the elite men’s race, and Jaime Nielsen come out on top after a crash radically altered the elite women’s race.

The elite men’s race was RoadCycling’s feature race of the day, and comprised 125km of road around the Te Awamutu area, starting from the Te Awamutu Sports Club. 11 teams of riders made their way to the start line, with Mike Northey, Michael Torckler and James Oram among those expected to light up the race that took place around two laps of an undulating loop. Despite being a teams race, there were a number of riders keen to really attack the race, taking it by the horns. That led to splits in the field from a very early stage that would eventually become two groups. The main peloton eventually seemed content to idle along as up ahead a group of seven established themselves as the break of the day.

In the move were Michael Torckler and Jason Thomason of Blindz Direct, Daniel Molyneux of Speeds Works Cipollini, Nick Bain of Team Skoda Racing, Te Awamutu’s Frank Sutton and Mike Northey and Spoken Cycles’ Logan Griffin. After initially opening up a modest advantage over the bunch, the gap proceeded to balloon out to several minutes. There were a number of teams who missed the bus in the break, and it was an extremely reckless one to allow to go clear. Michael Torckler and Nick Bain starred as breakaway companions together recently in the Trust House North Island Series round 1 that saw them take 1st and 2nd places respectively. Mike Northey too has been busy with his professional British outfit Madison Genesis.

With five teams represented in the break it was left to six to make the chase, and Saint Cycles put a few riders into making the chase happen. They were supported by Speed Works Ale who had a consistent presence at or near the front, with riders like Dean Peterken and Rod Carpinter in their line up. With 44km covered the gap had grown to 3 minutes while between them and the break there had formed a trio of riders who decided to attempt a chase effort courtesy of Te Awamutu’s Karl Poole, Spoken Cycles’ Ryan Wills and Rotorua Racing’s Sam Phipps.

They were in limbo for quite sometime, never managing to dent the break’s lead, but not getting enough of a gap to disappear out of sight of the peloton. Meanwhile the teams who were set to be a major force in the peloton like Team Skoda Racing were quite happy to sit up, knowing that Nick Bain was in the break. The same was true for Te Awamutu and the riders from Blindz Direct, and their lack of impetus in the chase was one of the contributing factors to the lack of urgency in the peloton. Halfway through the race the gap had exploded to 7 minutes and it was looking like game over for the bunch.

It would eventually appear to be game over for the intermediate group . . . or was it? It was for the early configuration as Karl Poole became the first to be caught, but a new chase group was beginning to form; with Steve Furminger of Bikelab joining forces with Robert Stannard of Team Skoda Racing; while Ryan Wills and Sam Phipps managed to hold on for a little longer before also being dropped after their earlier efforts. James Oram sprung into life though. With teammate Nick Bain safely up ahead and guaranteed at least 7th place at the finish line, he took his opportunity to make a move toward Team Skoda Racing seizing a stronghold on the teams classification.

Up ahead though the seven leaders continued to function efficiently together. Each worked hard to make the move count, with the minutes piling on top of each other as their advantage grew and grew and grew. Inevitably though the attacks would start and start they did. Mike Northey was particularly animated off the front of the break, as eventually his group began to splinter on the climbs. It would eventually come down to a small group sprint though and Nick Bain hit out for home and looked set for the win. But in the last metres it was Frank Sutton who powered through to take the win by the narrowest of margins in a three-way lunge for the line between himself, Bain and Northey. That was the order at the line with Michael Torckler finishing fourth.

Meanwhile the elite women took on the 80km course that saw disaster strike part way through. On a gravel section of road almost half the field were brought down in a crash with eight riders forced out of the race including Pedal Chics’ Bryony Botha and Cycling New Zealand’s Georgia Williams. Staying back with her teammate was Jaime Nielsen who saw that sadly her teammate’s race was at an end, but hers wasn’t.

Nielsen proceeded to embark on a manic chase effort to bridge back to the front of the race, an all out tactic that demanded that she call on her highly competent time trialling skills to virtually single handedly rejoin the front of the race. Once there Nielsen had the help of teammate Racquel Sheath who had managed to remain at the front.

Also in the leading group were Speedworks’ Emma Poole, Ramblers Cycling’s Amelia Watkinson and the Bikelab duo of Helen-Ruth Baillie-Strong and Grace Anderson. It came down to a sprint between the six of them, but Nielsen had the lead out of Sheath who has recently come away from the omnium national championships. Sheath did a perfect job to set Nielsen up for the win, and Nielsen managed to finish the job; narrowly beating Emma Poole to first place, with Baillie-Strong completing the podium.

The category 2 race was dominated by Aaron Strong of Black Spoke Racing, whose solo breakaway saw him time trial away to the win by 48 seconds ahead of Glen Carabine of Thermal Chemistry and Stephen Sheldrake of East Coast Velo. The three riders finished comfortably ahead of the rest of the field who arrived home over four minutes later.

It was far less clear cut in the Category 3 race as a group of five arrived at the finish line together. But Albany Bike Club proved strongest, with Steve Taylor crossing the line first ahead of teammate Darrell Gridler and Black Spoke Racing’s Andrew Gurr.

Finally to the Category 4 race, where again it was a very tight affair, with a bunch sprint having to decide the race. In the end Speed Works Diamante emerged fastest, taking four of the top eight positions at the finish line. Damian Mills was the winner ahead of Cycling Rotorua’s Chris Groome, with Zane Nicholl, Michael Hicks and Andrew Wilson completing a very successful day for Speed Works Diamante.

Racing continues in the Dynamo Events Team Championship on the 22nd November at the Thermal Chemistry Hamilton Open.