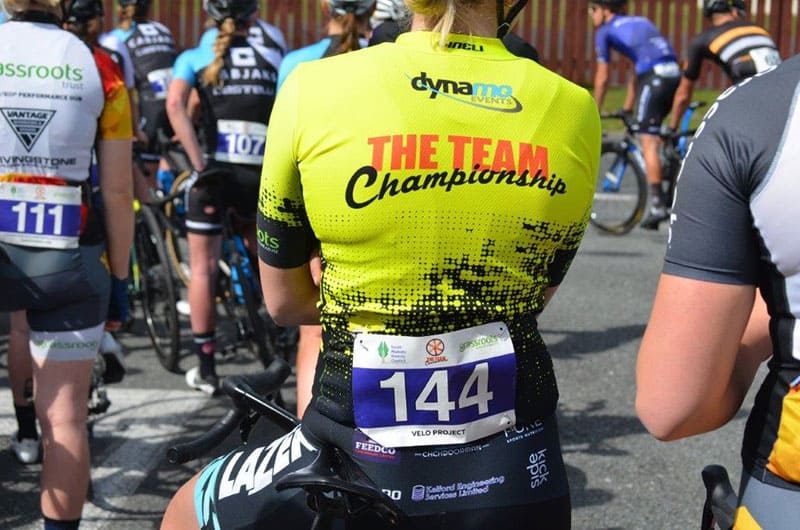 Keen to kick things off, Hodges was part of a group of five that escaped the field after just 5km of the 69.5km Elite Women race, instigated by the Velo Project duo of Kirsty McCallum and Annemarie Lipp. Joined by Kirsty James (Barfoot & Thompson Auckland Performance Hub) and McCallum’s familiar sparring partner Kate McCarthy (Cabjaks-Castelli Custom), the five worked efficiently together to earn a minute gap within the opening 10km. With McCallum and Lipp’s Velo Project teammate and Race Leader Ally Wollaston back in the bunch and poised to counterattack if required, the other teams were forced to take up the chase.

With only James and Lipp missing occasional turns as the race progressed through the rolling Tokoroa parcours, the gap came down to just 40 seconds, the bunch looking menacing behind. Sensing weakness, McCarthy kicked on the last of the hills with 10km to go, spitting James and Lipp, McCallum matching McCarthy while Hodges dug deep to hang on over the crest.

The three flowed well into the final few kilometres, and all eyes were on Hodges as the favourite for the sprint, McCallum and McCarthy not able to match her top end speed at the line.

“Yeah, that tickled a bit!” laughed Hodges, describing the late attack from McCarthy, “but it was good as it dropped us down to three riders. I was just lucky I could hang in there for that, all I was thinking about was actually being there for the sprint!”

“I think we have a good rivalry,“ said McCarthy of McCallum, “I watch her and she watches me, and we work well together so it’s good. I noticed Kirsty and Annamarie were missing turns so thought I could drop them, as I didn’t want Kirsty there in the finish too. My sprint is my weakest point at the moment, so 3rd is a good result”.

With McCallum pipping McCarthy for 2nd behind Hodges, Velo Project extend their lead in the Team classification, Wollaston just two points ahead of Hodges in the Individual ranking.

The Elite Men were out to test themselves on a new 85.3km circuit, and with 1106 metres of climbing they were not disappointed. A fast start proved the field were keen for action, thinned out lines of riders confirming the speed with no one allowed to escape. James Harvey (Spoken Cycles) and Mark Stewart (Livingstone Building Excellence WBOP Performance Hub) eventually squeezing away after 36km, their lead topping out at a minute as they started the third lap, prompting James Oram (Black Spoke Pro Cycling Academy) to attempt to bridge across.

With the gap drifting down to 50 seconds on the bunch and Oram just 10 seconds behind Harvey and Stewart, the race was stopped because of cattle on the road. Although the groups were set off again keeping to their timed gaps, Kergozou’s Team Central Roofing / Revolution Cycling sensed a lack of impetus, drilling it until all three were swept up. In the long chaotic drag race to the finish Corbin Strong (Spoken Cycles) just pipped Kergozou on the line, with Kiaan Watts (Black Spoke Pro Cycling Academy) taking 3rd.

“The break was pretty strong,” explained Kergozou, “and the hills were pretty hard, but I stayed with the group and we had all the boys on the front, committed. That sprint was an early one, I found a wheel but it dulled just as Corbin hit me. I started coming back but it was too late. It’s a good result for the jersey so I’m happy.”

“They parked a few guys at the front and they just had so much speed,“ said Watts of the chase. “We took a back seat as we had James out there, but I knew they would pull them back. I was just watching all those track boys, they’ve got some speed.”

Another active race was the Open Women category, with race leader Amanda Till (Team Body Performance) ever the antagonist trying to prompt moves throughout the course. Marked by the field the finish came down to a bunch sprint, Ruby Spring (Hireace Rockets) taking the line ahead of Georgie Simpson (Hireace Lightning Bolts) and Anne Marie Guiney (Team Body Performance). Spring, who got the bunch sprint behind Till’s solo effort in the Cambridge race, takes over the lead in the Individual competition, with her Hireace Rockets squad now top of the Team points table.

Daniel Holt-Pederson (Burnsco BSR Black) took the win in the reduced field of the Category 3 finish, just ahead of Mark Burney (Paxton Property Services) followed by Tim Pawson (Burnsco BSR Yellow). CRM hold on to their Team lead, as does Andrew Weatherly (Mike Greer Homes Waikato) in the Individual competition.

In the only breakaway finish, Darryl Soljan (Signature Homes Racing) beat Graham O’Grady (McKenzie and Co) to the line in the Category 4 race, with Matt Miln (BDO Auckland) nabbing the best of the rest. Miln’s BDO Auckland team holding their top step and 4th placed Elijah May (Taupo Cycling Club) still ahead on the Individual point’s tally. Andrew Feringa (Hireace Wheel Deal) took out the Category 5 sprint, beating the Forestland Wheelers duo of Alex Colquhoun and Quinn Dixon. Feringa wears the Leaders jersey in the next round, the Forestland Wheelers take the lead in the Team competition.

The next round is to be held on the 22nd November, the Ngaruawahia based Waikato District Council Grand Prix. Debuting a brand-new circuit, Category 1/2/3/4 and Elite Women will complete two laps of the rolling 50.4km loop, resulting in 807 metres of climbing. Racing starts at 10:00am, for more information about the next round and a full list of results and overall points ranking of each of the categories so far head over to Dynamoevents.co.nz