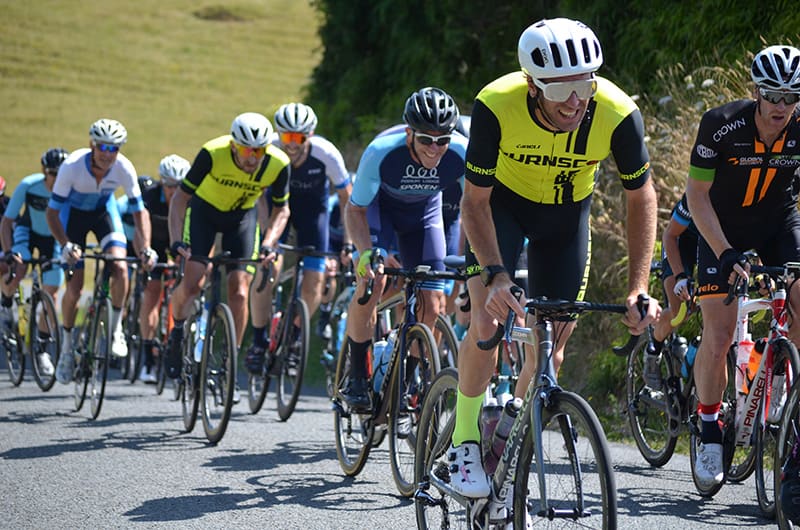 On a day when finding shade would be the preference, no one was hiding when it came to producing some spectacular racing in Race 5 of the Team Championship, the Grassroots Trust Tamahere Classic.

Embargoed from the riders until just two days before, the undulating route proved to break up the bunches in most of the categories, with Scotsman Valley Road and Tahuroa Road testing all of the racers.

Out to test the rest of the bunch, NVOKE’s James Barnes attacked pretty much from the gun in the Category 3 race, and continued to extend his lead gaining up to two minutes by himself before CRM’s Andrew Lloyd and Burnsco BSR’s Kevin Palmer bridged up to him by the 50km mark of the 85km race. Although working well, their lead started to fall, and as the three approached the second ascent of Tahuroa Road they were in sight of the chasing bunch. With the pace increasing, the main group split on the climb and a group of seven edged off towards the lead three. Sensing it was time to move, Lloyd pushed on the pressure, dropping Palmer and Barnes as the chasing group were brought back by the main bunch. Taking advantage of a stalemate back in the remnants of the field, Lloyd continued to dig deep within his reserves, managing to stay away for the final 15km to take to the line honours.

“I expected to be caught,” admitted Lloyd at the finish, “but I got lucky as they were looking at each other. It was only at 5km to go and I still had a lead that I was pretty confident that I’d get it. There was a big enough gap that I could enjoy the last k, and it was just as well as I had nothing left by then.”

A solo attack also shaped the Open Women’s event, Amanda Till from Team Body Performance Clinic slipping off the front along Scotsman Valley and managing to hold off the field to take the win and nab some vital points for her and her team, with Ruby Spring of HIREACE taking the bunch gallop ahead of Cycling New Zealand Development’s Aimee Shaw.

“It was just one of those freak scenario’s,” laughed Till afterwards, “I just took a bit of a flyer. The next minute I realized no one was coming with me and I was just going to have to go and see what happened. I couldn’t see them at the top of the climb so I just had to continue, and it’s a long way from the top of that climb all the home!”

Not wanting to hang around, aggressive racing in the opening kilometres resulted in an early break dictating events in the 115km Category 1 race, G D Pringle / Spoken Cycles rider Michael Torckler instigating a move with Josh Kench of Team Skoda-Fruzio and Toby Atkins of Team Central Roofing Revolution Cycling. Wanting a piece of the action, Jordan Kerby, a teammate of Atkins, followed suit, and together with G D Pringle / Spoken Cycles rider Xander White and Owen Owens of the Crown-Global Security squad, eventually managed to bridge across to form a successful alliance of six.

By the 77km mark Owens was dropped, but as the gap had exploded to over four minutes it was clear that the race was to be decided by these remaining five.

Pressure from Torckler and Kench split the five on the final ascent of Tahuroa, with Kerby just hanging on to form a final trio. Torckler’s continual attacks on the way in eventually forced Kench away, Kerby digging deep to hold his wheel and roll him in the sprint.

“It was quite difficult to get across,” noted Kerby of the original move, “because Torckler was on the front and it’s never easy to get across to him. That group of six was riding pretty damn hard and I was suffering quite bad, I actually thought I was going the worst. As Torckler and Josh led it up on the climb I was just capable of hanging on over the top, and then Torckler was just laying into us on the way back in. He dropped Josh but I managed to stay with him and just pip him on the line on the way in there. He was just really putting the pressure on and if he’d done a few more attacks he would ridden me off too. I just wanted to get to the finish, it was bloody hot out there!”

“I put in a couple of attacks to try and get away,” recalled Torckler, “I managed to drop Josh with about 5k to go but Jordan is an Individual Pursuit World Champion [2017], so I was never ever going to win that race.”

Torckler’s teammate Josh Kuysten extended his lead in the Individual competition going into the final round, their G D Pringle / Spoken Cycles team standing strong on top of the Team Points table.

Charlie Tattersfield of the Grassroots Trust Performance Hub was another rider to solo to victory, taking the Category 2 race ahead of Gary Mikkelson of Waipa Plumbing and Gas / Spoken Cycles and Tank Guy / BikeBox’s Sam Gardner. Gardner’s points have helped his Tank Guy / Bikebox squad to top the Team Points table, while his teammate Ethan Craine still leads the Individual competition.

The only real group finish was contested in the Category 4 race, with Peter Wilson of the Eves Real Estate squad taking the win ahead of teammate Andrew Gilman, squeezing out Craig Burke of Signature Homes Racing to 3rd. Burke holds his lead in the Individual competition while the Quadrant / PTM are still ahead of BDO Auckland in Team Points.

Burnsco Gold’s Kieran Benade took his third win of the Championship to continue his dominance in the Category 5 race, although his team are only a single point ahead of McKenzie and Co / E G Winter.

This 2019/20 edition of the Team Championship cumulates on the 2nd February in Tokoroa, and with double points awarded to the winners of this final race there is obviously still plenty to race for. For more information on all the races so far and more details of the final race head to Dynamoevents.co.nz