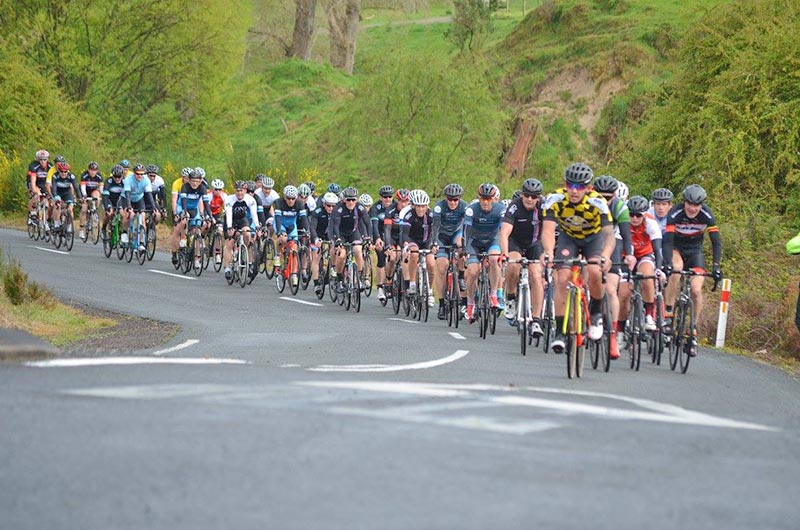 Despite essentially racing on the same course, the Women’s Elite and Men’s Category 1 races couldn’t have produced a more different outcome in Race 3 of the Grassroots Trust Team Championship on Sunday. Keen to instigate the initial racing, Tania Sharp of the St. Marks Brest Centre team attacked almost right from the gun, riding solo for over 70km and managing to stay away from the chasing pack all the way to the finishline, while Revolution Cycling 100%’s Mike Carswell waited until last kilometre before making his final race winning move to claim victory in a very animated Men’s race.

Although the rain had stopped, damp roads and strong winds greeted the riders rolling out from the Ohinewai race HQ, the undulating circuit making it a race of attrition for many with riders getting dropped within the first 5 kilometres. In the Men’s race the tempo was fast, Series Leader Michael Torckler of the Blindz Direct team keen to keep the pace up to filter out the field, Ryan Christensen of CrediFlex Pro4mance was one that seemed to be continually looking to form a breakaway attack.

After 62km of the 110km race it finally split, Carswell launching out of the field, chased by a group of seven riders including Christensen while Torckler found himself chasing behind. With only one teammate left to help, Torckler dragged the bunch along keeping the breakaway at 30 seconds, while Spoken Coaching’s Luke Mudgway and Team Skoda Racing’s James Oram sensed a weakness and bridged across to the leaders.

Once there, Oram, conscious that he was being marked, instructed his Team Skoda Racing teammate Chris Denholm to start attacking, so he could counterattack if Denholm failed. Blindz Direct’s Cameron Wynniatt covered Denholm’s attack, quickly joined by Carswell, while Oram started to distance the remains of the break. Into the finale, Carswell jumped hard, managing to get the gap on Wynniatt, and although Denholm forced to settle for third his efforts were not in vain, with Oram nabbing forth Team Skoda Racing moved up to take the lead in the Team award.

“That wind, I think that pays off for a bigger guy like me,“ said Carswell afterwards, “although with 8k’s to go I was cramping up so was a bit worried there. At the finish I just saw the opportunity to get a gap and had a crack, but it was a painful final straight into the headwind though!”

“It was good to have Cameron up there in second,“ explained Torckler, happy to hold on to his Series Lead, “and I’m really pleased for him. The lack of help (from the other teams) was a bit frustrating but it was good for the legs ahead of the next race.”

With their leader disappearing from view up the road, Tania Sharp’s St. Marks Breast Centre teammates did their best to cover any chases from the rest of the bunch, eventually Cycling New Zealand Junior Hub squad member Stella Nightingale slipping through their net with Olivia King from the Cycling New Zealand Junior White team joining her soon after. Sharp was too far ahead despite their best efforts, cruising in with a three and half minute advantage over Nightingale, King dropped on the run in but holding on for third.

“I guess I just thought we can’t just let her have it,” gasped Nightingale at the finish, “we just had to go for it and chase as hard as we could but she was just so strong.”

Despite the windy conditions and rolling course, Sharp was undeterred; “Perhaps it probably wasn’t the best day for a solo breakaway! All I was thinking was that I’d give it a go for as long as I can and I’d see what happens. My Garmin (computer) was set on miles so I didn’t know how far to go, I was trying to figure the maths all the way round! I got a time check from the lead car at about 20k’s but after that I had no idea, I was just looking over my shoulder and hoping I could hold on.”

Sharps performance puts her one point ahead of King on the Leader Board, while the Cycling New Zealand Junior Hub squad lead the Team ranking.

Elsewhere the racing was equally as exciting, Aaron Strong of Burnco Black Spoke Racing soloing to a Cat 2 win to extend their lead in the Team Series, while Grit Coaching’s Drew Woods edged out two riders from Team Ruckus Racing to nab the win in the Category 3 race, the Hot Cycles / Jack Tar team holding on to the top place. Matteo Garbagnati and Benedict Burgess took the first two places on the podium for the Mt Eden Cycles / Promapp squad, adding to their teams lead in the Cat 4 race, while the Croucher Brewing Co Cycling Team hold on to their lead in the Category 4B division, Barry Pritchard of the Taupo Cycle Club taking the sprint.

With just a few points separating the lead across all of these categories the series is nowhere near settled, so we can expect some thrilling racing in the final three races.

Next up is the Onewhero Classic on Sunday 10th December, and with just a few points separating the lead across all of these categories the series is nowhere near settled – expect some thrilling racing in the final three races.

For more details of this race and a full list of results from the Ohinewai round head over to the Team Championship webpage.