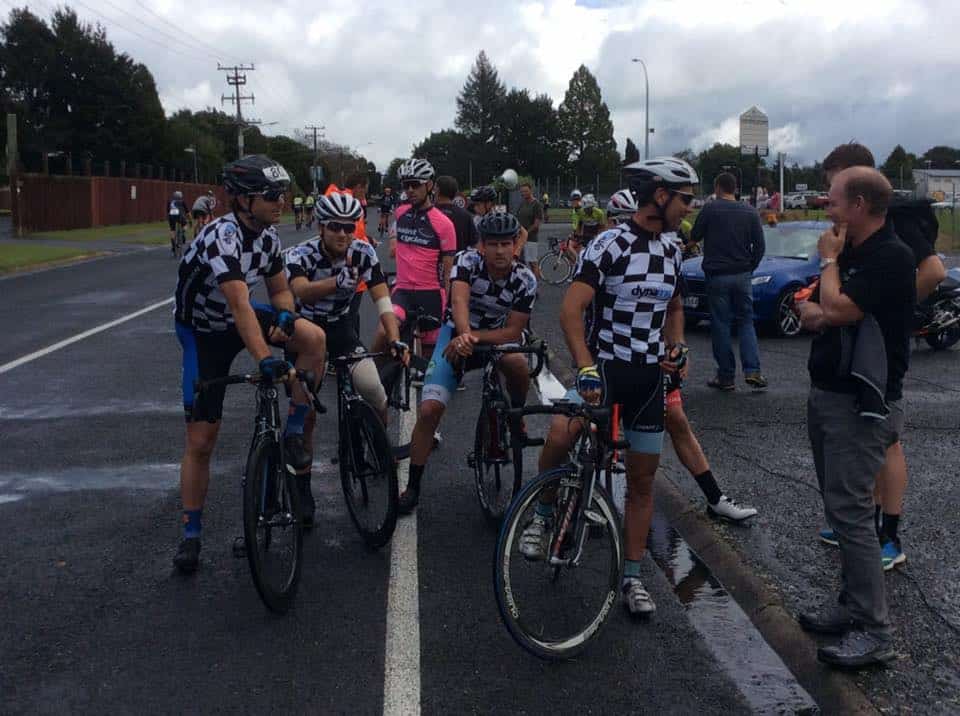 Held over the hard Tokoroa course, the final day of racing in the Dynamo Events Team Championship was never going to disappoint. With the mornings Road Race deciding the Individual Series winner and the afternoons Team Time Trial confirming the Overall Team standings, it was destined to be tough day for all of the contenders.

Returning after his Race Two win, Cycling New Zealand’s Regan Gough showed his intentions early on. Counter attacking an initial break from his Cycling New Zealand teammate Nick Kergozou, Gough “just went full noise for as long as I could. When I looked back I saw there was three of us and one coming over, so we went.”

Gough’s attack caused chaos behind as the chasing bunch immediately split into five smaller groups, with the Individual Series Leader Michael Torckler of the Blindz Direct team managing to stay near the front as 2nd placed Frank Sutton was dropped.

“I noticed he was not there”, said Torckler afterwards, “but I wasn’t surprised considering how I was feeling at the top of those hills. It was full gas all day and I had to ride pretty clever just to get to the finish line”.

The leading group of four, Gough, Callum Gordon from Team Skoda Racing, Josh Aldridge from Torckler’s Blindz Direct team and Logan Griffan from Spoken Cycles, worked well and got a gap up to the two minute mark by the halfway point before a chasing group of eight finally started to drag them back. Pulling this group were the likes of Sam Gaze and Aaron Gate of the Dynamo Invitational team with big efforts from even Torckler himself, concerned that Griffan could gain enough points to topple his Series Lead.

Just as the leaders were in sight Gough attacked, staying clear from the rest of the break all the way to the line; Griffan squeezing in for second while Torckler nabbed valuable points from the chasing group sprint to cement the Overall Series win. “I was pretty impressed with those guys out front,” noted Torckler, “we just couldn’t pull them back and we were going pretty hard. I’m just relieved to get through that.”

For their efforts, Griffan and Gough were rewarded with 2nd and 3rd respectively in the Overall Individual standings.

As expected, the Elite Women’s race didn’t disappoint either; Series Leader Amanda Jamieson of the Speedworks Donna team kept on her toes after an early attack from Cycling New Zealand’s Jamie Neilson. “I went on one of the climbs,” said Jamie after, “just slowly crept away from them, it was just some long time trial training!” With Neilson out front a chasing group formed behind, Jamieson keeping an eye on her closest rival Natalie Kerwin from the Ramblers Cycling Club. In the end it was Kerwin’s teammate and Race Five winner Amelia Watkinson who took up the chase. “Rebecca Kingsford of the Pedal Chicks and I went pretty hard up through the forest,” said Watkinson, ”and then I’d hoped to catch Jamie and work together.” Watkinson, now solo, went in pursuit of Neilson; caught and then passed her and continued to her second race series victory. “She’d been working pretty hard previously and been away for quite some time, “said Watkinson of the Cycling New Zealand rider, while all Neilson could do was watch, “She just went straight past me and I was like ‘yep that girl has won the race!” Neilson held on for second place while Jamieson took the bunch sprint to seal the Overall Individual title. Happy with the Series win, Jamieson is already thinking of the future, “I’ve got the Te Awamutu tour next weekend then the build up for Nationals. After that I’m heading off to race in Holland and Belgium in June.”

With the Individual Overall Titles decided, the afternoon Team Time Trial sorted the final placings for the Overall Team prize. With dominating performances, Cycling New Zealand took out both the Elite Men and the Elite Women’s races, confirming their Olympic preparation is right on track. “It was great to come along and get stuck into the racing here,“ said Cycling New Zealand Coach Tim Carswell, “it’s only four months until Rio and while a lot of work has already been done we’ve got some hard work ahead of us.”

Fighting for the Overall Team honours, Torckler’s Blindz Direct team did just enough to secure the victory, the title testament to their consistency every race, “I think we really raced in the spirit of team racing,” said Blindz Direct Team Manager Stuart Thomason after receiving the award, “we really supported each another all the way through, and that’s why we got the result.”

Finishing third to a Cycling New Zealand Development squad also sealed the Teams Overall Title for the Ramblers Cycling Club in the Elite Women category, Team Leader Kirsty McCallum explaining how they also played the long game, “It was pretty stressful right from the start and it took us four races to get the Race Lead, but once we were there we held it.”

With Thermal Chemistry extending their lead in the Category Two race and Speedworks Diamante locking in their win in the Category Four race, all eyes were on the tight Category Three race. In the end it was decided by milliseconds in the Team Time Trial with Albany Bike Club edging out Black Spoke Racing by less than a tyres width to claim the Category Three title.