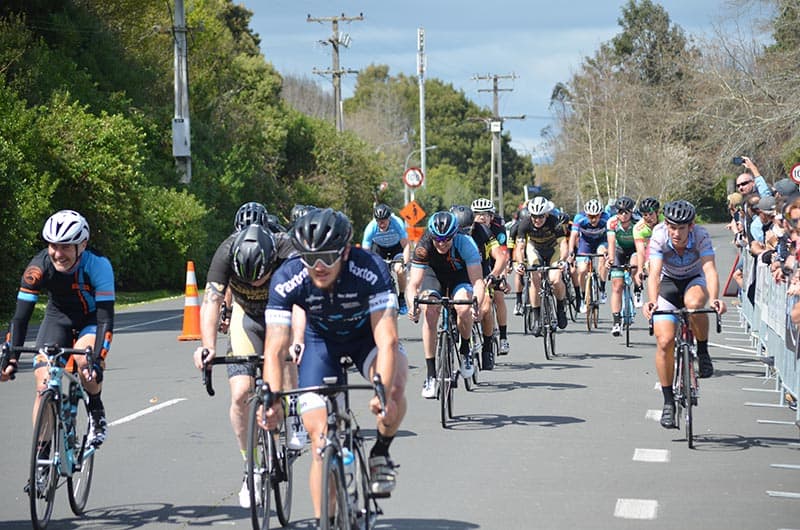 Beautiful Waikato sunshine greeted the riders rolling out of Tamahere for Sundays opening race of the Grassroots Trust Team Championship six event series, the rolling roads of Scotsman Valley challenging riders across all of the categories, the climb of Te Miro instigating winning moves across all of the races.

Strike one to Skoda

With a teammate out in the early break, it was Team Skoda Racing’s James Oram who took the initiative, attacking just before the traditional catalyst Te Miro climb, causing chaos amongst the chasing bunch.  Bridging to the remnants of the break then pushing on down Waterworks Road, a number of chasers from the pack managed to desperately tag on while the rest of the bunch was now split into fragmented groups of twos and threes.

Into the headwind along Scotsman, Oram, Blindz Direct’s Michael Torckler and Spoken Coaching’s Alex Heaney, the three obvious hitters for the finale, watched each other closely. Oram, knowing he was marked, let his Skoda teammate Josh Kench follow an attack by Kiwivelo’s Theo Gilbertson, the two drifting away and hanging onto to the finish by just a matter of seconds despite the best efforts of the chasing Heaney and Torckler.

“I saw Theo was a bit tired by the finish so I just gave it a dig and it worked out well,“ said a triumphant Kench at the finish, edging out Gilbertson in the sprint to take the win, “I’d seen James was not far behind, he’d attacked in the last few hundred metres and took a clear third.”

“The boys were amazing,” beamed Oram, “we had every move covered starting with Harry [Waine] in the early breakaway, so I managed to jump across to him before Waterworks Road. Once the group split in that last 20km it was Torckler, Heaney and myself just hitting each other.”

With a 1st and 3rd Team Skoda Racing lead the Category 1 Team Points table, while Torckler was content for now to finish with three Blindz Direct riders in the top 10; “it’s a good result for the team and puts us in good stead for the next round.”

Once again it was the testing Te Miro that opened up the Women’s race, a small group pushing over the top, managing to stay away from the chasing pack to contest the sprint finish back in Tamahere.

“My plan was to just stay near the front over the hill,“ explained race winner Connie O’Brien of the CNZ Junior Hub team, “the pace picked up over Te Miro and a few of us took off over the top and pretty much team time trialled it back, helping each other over the last of the hills.” In the finale CNZ Junior White’s Olivia King jumped on Team St. Marks Breast Centre’s Tanya Sharp early sprint, O’Brien taking the inside line on the corner to stay clear, Sharp just edging out Lee Boon (CNZ Junior Hub) for 2nd.

Series Leader O’Brien is relishing the challenges of the defending her Leaders jersey in the next race of the series; “I wouldn’t say I’m a climber, and I wouldn’t call myself a sprinter either. I just like the tough hilly windy courses.”

The riders head for a double test in Tokoroa on Sunday 15th October. A tough road race circuit that boasts 356m of climbing each lap is followed by a challenging out and back 17.6km team time trial, both sure to produce exciting racing and potential changes to the overall standings of each category.

For the full results of Race 1 and more information on the next race head to Race 2 webpage.

See you all in Tokoroa for Round 2!