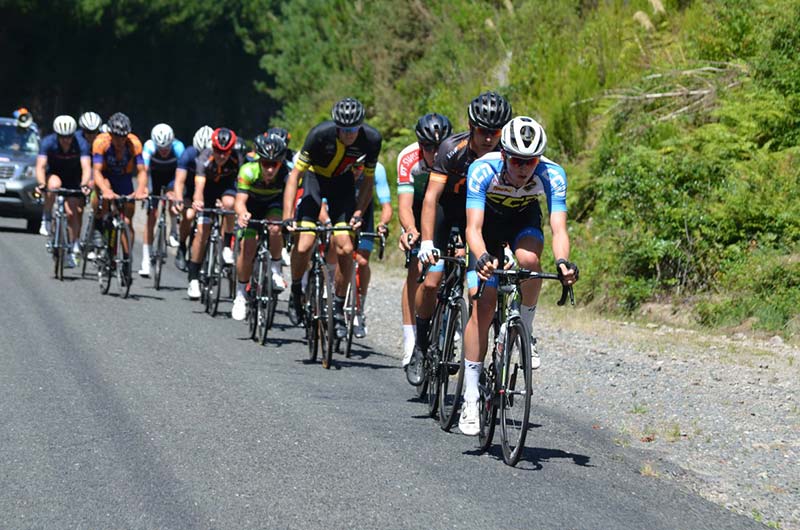 Clear blue Tokoroa skies greeted the riders for this tough undulating circuit, hydration a priority amongst the racers. The CrediFlex Pro4mance team keen to infiltrate any early moves and did so, Sutton pushing a break of four to quickly get a two-minute gap on the main bunch. Joining him were Team Skoda Racing’s Josh Kench, Tank Guy/Bikebox’s Steve Nichols and Jason Thomason of Series Leader Michael Torckler’s Blindz Direct team, Thomason sent to watch over Sutton who was the biggest danger to Torckler’s lead. While the pace over the circuit split the field it also split the break, Sutton forcing Nichols and Kench back to the bunch, while all the time being marked by Thomason. As their gap reduced in the finale to 35 seconds Sutton dragged Thomason to the line, the Blindz Direct rider careful to take the points away from Sutton to reduce any damage to Torckler’s lead. Team Skoda Racing’s Finn Fisher Black also salvaged some points for his team, attacking solo from the chasing bunch to claim 3rd.

“The team plan was to attack and be in every move,” said a content but disappointed Sutton afterwards, “I know all the roads out there, I train on them all the time so I was telling the guys what was coming up. It is just rough and hard and it got down to just me and Jason over the last climb.”

“Jason knew that Torckler would be behind so he played the team tactic just to sit on but I just had to push on. I backed myself in the sprint but he was able to roll me in the end by half a wheel. Pretty agonizing.”

“I had to play the team card on Frank,” explained race winner Thomason, “he’s only 20 points behind Mike so if he got the win and Mike got nothing then the Overall would be quite different. Now we’ve pretty much got that sewn up so we just want some more team points.”

The unrelenting course also played a part in the Open Women’s race, breakaway specialist and Series Leader Tanya Sharp was continually marked by the bunch early on but managed to shake most of the riders off after only 20km when chasing an early attack by Cycling New Zealand Junior Hub rider Lee Boon. The two worked well for the rest of the race, staying away all the way to the finish line. Cycling New Zealand Junior Hub rider Sammi Ogle completed the podium, taking the bunch sprint.

“It was hard racing today,” said Team St. Marks Breast Centre rider Tanya Sharp, “I tried a couple of times in the first 20km just to stretch my legs and see what happened but everyone was always behind me. When Lee got away up the road I had to really push to try and catch her. The two of us worked really well, didn’t ease off, but she just outsprinted me.”

“I knew she could climb well but I knew that I was pretty strong on the hills as well,” explained Boon post-race, “so I just tried to drop her but it didn’t work. In the last kilometer or so we were playing a bit more cat and mouse, I was trying to sit behind her but she didn’t really like that. It was pretty even, she was really good today.” Ogle and Boon’s performance has also extended their lead in the Team Points Award for their Cycling New Zealand Junior Hub Team.

All the teams go head to head again in the last round of the Team Championship, returning to the Tamahere circuit on Sunday 11th February. This testing loop includes the infamous ascent of the Maungakawa climb, Cat. 1 and Cat. 2 forced over it twice. Sure to split the field it could even decide the Series, a climb that Cat. 1 Series Leader Michael Torckler is looking forward to, albeit with respect of the course; “Yeah definitely, I love that climb. I know it pretty well too so I’m pretty excited to go up there twice. But it’s a long way from the top to the finish line though.” And with his Blindz Direct team just five points away from Team Skoda Racing’s lead on the Points Board, there’s bound to be fireworks on that final climb.

Racing starts from 10:00, for more information on this final race of the Series and a full list of the results from each of the rounds so far head over to the Team Championship webpage.