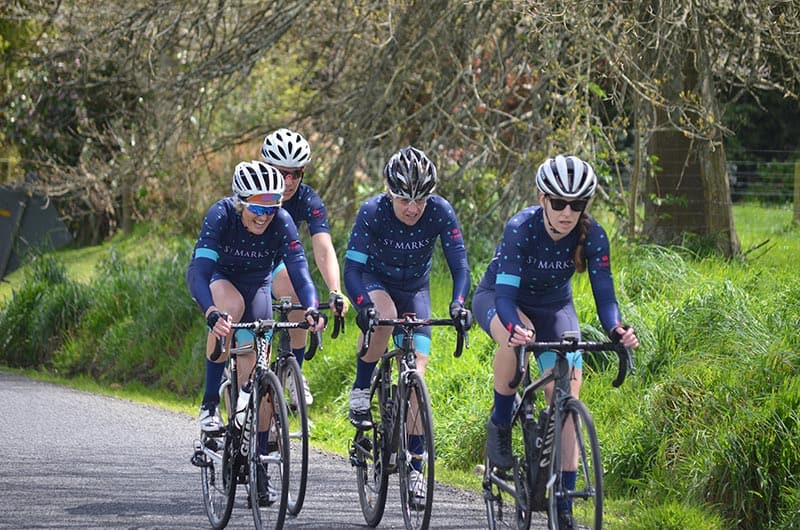 Michael Torckler of the Blindz Direct team stormed into the Race Lead of the Grassroots Trust Teams Championship in Tokoroa today, firstly taking control of the race in the finale and then superbly executed a bike throw to secure the victory from Spoken Coaching’s Luke Mudgway right on the line.

Dark brooding skies had greeted the riders as they pulled up to the start time, the clouds clearing as they rolled off onto the heavy roads of the Tokoroa circuit, the riders seemingly sheltered from the tailwinds by the forest, the headwind greeting them through the clear sections.

Eager to start the racing in these tough conditions was CCN Factory Racing’s Taylor Gunman, Spoken Coaching’s Alex Heaney and CrediFlex Per4mance’s Ryan Christensen, the three escaping soon after the start and quickly gaining an advantage of over two minutes. While the three worked solidly through the forest roads their gap was slowly being brought down to steady 45 seconds, Team Skoda Racing doing most of the work to contain them so to protect the Series Lead of Josh Kench.

After over 50km out front and just 15km to go Team Skoda finally reeled them in, Spoken Coaching’s Luke Mudgway attacking immediately on the catch, only to be chased down by Blindz Direct’s Michael Torckler. Despite a strong headwind home it was clear no one was content with a bunch sprint, attacks continuing all the way in, a photo-finish required to separate the top three.

“Yeah, it was close,” said Torckler afterwards, “although I was actually trying to lead out Josh (Kuysten, his teammate and designated sprinter) but with that headwind it got a bit messy in the finish there. I squeezed through but Josh didn’t make it, he got 4th.” Revolution Cycling 100%’s Nick Kergozou scoring third.

In his first race back in New Zealand, Gunman, a European based Professional, was keen to get his face in the wind for his sponsors; “It’s that race intensity that you can’t emulate in your training, so it’s better to race hard than sit in and with these hard roads I think it’s easier in the break.”

Also back from racing in Europe was Christensen, relishing the conditions and even trying a few extra digs after the break had been caught. “It was hard but good,“ he beamed, “no one wanted to settle for a bunch sprint but it was really hard with that headwind in that last 5k’s. But it was pretty tough out there in the break, Taylor and Alex were hauling and I was just trying to match them. It all was good training for Southland.”

Despite being nudged out in the morning, Mudgway’s Spoken Coaching team dominated the afternoons Team Time Trial, beating Torckler’s Blindz Direct team by nearly 20 seconds and moving the Spoken team into the overall lead in the Team Points competition. “We had Alex (Heaney), Logan (Griffin) and myself to anchor it with a few younger riders in there. We won it last time here so we were looking to do that again.” Showing how close the racing is in this category, the 2nd, 3rd and 4th placed teams, Blindz Direct, Team Skoda Racing and CrediFlex Pro4mance were separated by only 4 seconds.

The Women’s race provided equal drama, a crash in the last 10km shuffling up the dwindling pack but still resulting in a bunch sprint of 17 riders. “The plan was to keep the pace high,“ explained race winner Sammi Ogle of the CNZ Junior Hub team, “it was pretty hilly so we just stayed at the front and made the pace. I wanted it to be a bunch sprint but if a break went the plan was for us all to go with it.”

The late crash brought down several riders, including Ogle’s teammate Stella Nightingale; “The pace was a bit surgy up the hills,“ described Nightingale, “and it was just a touch of wheels. The crash brought down four of us, my teammate Renee (Young) had a broken derailleur but the other three, me, Maddi Douglas (CNZ Junior White) and Megan Spring (CNZ Junior Black) chased to get back on.”

With Nightingale’s teammates doing their best to slow the main bunch the group of three finally made it back, just in time for Nightingale with the finale. “I was pretty tired after the chase so just took two of my teammates, Eva (Parkinson)and Sammi, up to the front so they would be good for the sprint, using all my energy leading them out since I had no acceleration after the chase. I just did what I could to help the team.”

“Our team was echeloned across the road at the finish for the lead out,“ said 3rd placed Eva Parkinson, “we had Lee (Boon) and Stella, then Connie (O’Brien), then me and Sammi so it worked out well for us.” Despite all this, another of the crash victims, Maddi Douglas, also managed to muscle her way to finish a creditable 2nd. Race Leader Connie O’Brien (CNZ Junior Hub) finished a close fifth so retains her race lead into the next round.