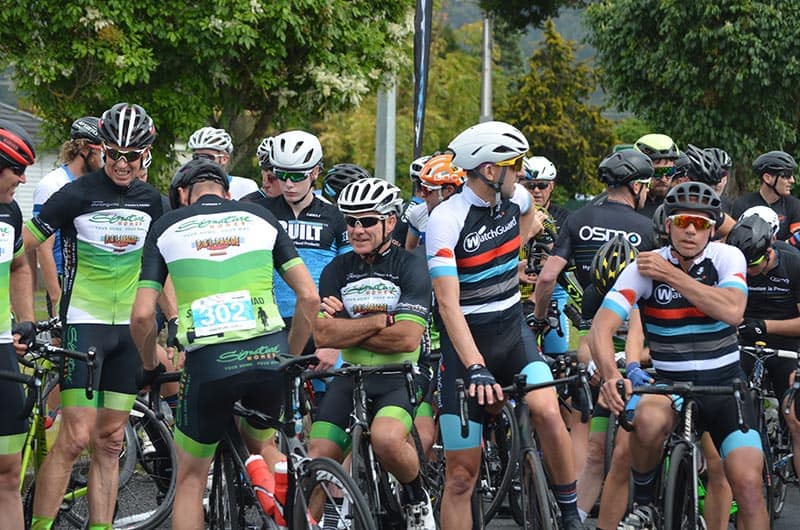 Sunday’s Race 3 of the Grassroots Trust Team Championship resulted in exciting racing from the startline right until the finish, closely fought sprints deciding the winners across many of the categories. Campbell Stewart (WBOP Performance Hub) defeating his two breakaway companions in the Category 1 race, Ally Wollaston (Velo Project) squeezing past the other three of her group in the finale of the Elite Women’s race.

The new Ngaruawahia course typical of the Dynamo formula, quiet back roads with stunning views that would be perfect for a Sunday roll, however always twisty and bumpy enough to make racing on them quite the challenge.

These 110km of rolling twists and turns were perfect for a break to go and be out of view quickly, which was obviously the intention of many of the teams as attack after attack dominating both the Category 1 and Elite Women’s races. G D Pringle’s Alex Heaney, defending his Race Leaders jersey in Category 1, was forever active at the front chasing everything and anything that tried to drift away, joined by his teammates whenever they could. WBOP Performance Hub’s Regan Gough, just two points behind Heaney, was one happy to instigate these digs, his team of just three always amongst the groups trying their luck; Team CrediFlex and Tank Guy / Bike Box also lurking to capitalise on any opportunities that arose.

Eventually, after a flurry of activity just past the 80km mark, a group of three finally started to make a significant gap on the whittled down main bunch. Gough and Heaney, each with a man in this break both seemed happy to strike a truce, especially since Heaney admitted after; “to be fair, I think we were both a bit cooked at that point.” The three, Campbell Stewart (WBOP Performance Centre), Xander White (G D Pringle presented by Spoken Cycles) and Frank Sutton (Team CrediFlex Cycling) worked well together, quickly establishing a minute on the bunch, despite a few attempts by the Espoir Racing and Dynamo Events teams to haul them in. “We kept the momentum going,“ explained White post-race, “and as soon as we hit the minute we all knew that if we just kept it rolling and kept it steady that we could get to the finishline.”

With the trio’s gap reaching out to 1:20, the bunch were rudely awoken by a surprise attack from Team CrediFlex’s Ryan Christensen. Although dropped from the main field after the initial flurry, Christensen had fought his way back, caught the bunch napping and rolled straight through. “I’d thought my day was over, but I just kept on fighting, just picking off rider after rider. I managed to bridge across then thought I’d wack them by surprise.” Heaney, the first to react, initially caught Christensen, but after the CrediFlex rider jumped again he too retreated back to the bunch.

Up front the three were readying themselves for the finale, Sutton trying to get the jump on Stewart went first; “I knew that was my best bet, so I tried to get away through the corners at the end but it didn’t come off, but at least I tried.” After reigning in Sutton, White was the next test, Stewart first dragging him back then leaving him before the line.

“It was a pretty hard race right from the start,” reflected Stewart afterwards, “but we just managed to sneak away during a tailwind rolling section. Obviously they [Sutton and White] knew I had a good sprint on me, as they both attacked coming through those final corners. First Frank attacked and then Xander took a long one from the last corner to try and catch me out, but I was able to jump on.”

While Christensen held on for 4th, Heaney and Gough finished in the bunch behind, and despite the best efforts from the field, Heaney retains his Individual Lead and his G D Pringle powered by Spoken Cycles team continue to head the Teams Points table.

Equally, the Elite Women’s race was also animated with attacks. Velo Project, out to continue their clean sweep of wins so far, were keen to cover any moves that went. So when Deborah Paine (North Island Womens Performance Team) started the squeeze on the first of the climbs it was Velo Project’s Ally Wollaston who was hot on her wheels, Ally’s teammate Elyse Fraser and Castelli Womens Racing’s Bronwyn MacGregor bridging across, MacGregor’s teammate Penny Pawson eventually completing the break.

On the final climb it was once again Paine who forced the pace, only Fraser and Wollaston able to stay with her, and, despite suffering from a head cold all week, it was the tenacious Pawson who managed to claw her way back to them just before the final kilometre. Undeterred, Pawson was the first to launch the sprint; “I went early because the Velo Project girls are track riders, so I knew they would have a good 250m kick. I hoped I could hold it but the legs weren’t just quite there today.”

“That was unexpected,“ said race winner Wollaston of Pawson’s jump, “as it was a great effort from her to even get back. It actually worked well as I sprint the best from a fast lead out, so it played into my hands pretty well.”

Elsewhere, Jorga Swain (FOXES – TOOT TOOT BEEP BEEP) took one of only solo wins of the day, hers in the Open A Women’s category, the Surprisycle team moving up into the Teams lead after four of their riders finished in the Top 10. The RABBITS – TOOT TOOT BEEP BEEP team continued to improve their lead in the Open B Women’s category, Sophie Hamer taking line honours ahead of her teammate Sam Sedgwick.

Race 4 is to be held on the 9th December, a return to the Onewhero circuit, the riders rolling off from 10:00am. For more information on this next race of the Series and a full list of the results from each category of all of the rounds so far head over to the Team Championship event pages.