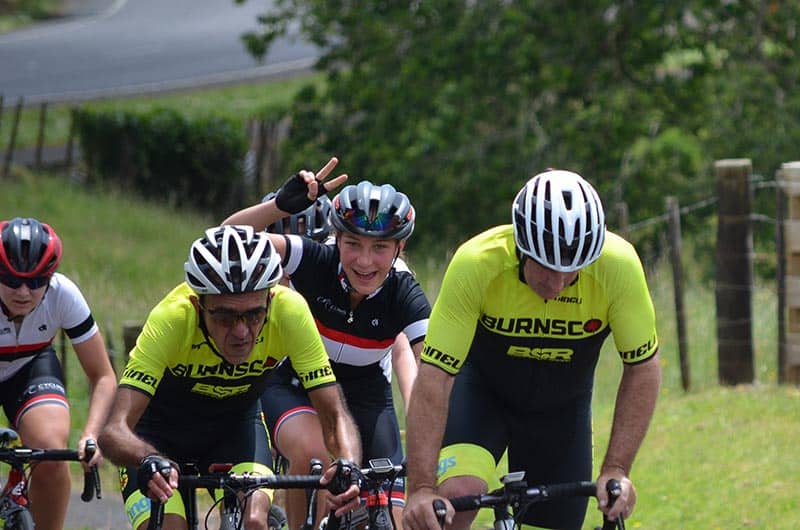 The final climb of Sunday’s Grassroots Trust Team Championship Race 4 was always going to play its part, and, although it produced some surprises, it certainly didn’t fail to deliver some exciting finishes across each of the eight categories of races. Jayden Kuijpers (Team Skoda – Fruzio) valiantly held off a chasing field to take a fine solo win in the Category 1 race, while Ally Wollaston (Velo Project) owned the bunch sprint to make it two in a row in the Elite Women’s race.

The Onewhero circuit is either feared or cherished depending on the type of rider you are and what form you bring. Throw in some fine weather with a good dose of blustery crosswinds and you’ve got an ideal race to test the field.

Not that these any of these ingredients deterred Race Leader Alex Heaney (GD Pringle presented by Spoken Cycles) from animating the race as soon as the flag was down, forcing last year’s winner Ryan Christensen (Team Crediflex Cycling) to chase to get back on after a puncture in the very first kilometre. Second placed Regan Gough was keen to send his WBOP Performance Hub teammates out to soften up Heaney, while Team Paxton, Team Skoda-Fruzio and Tank Guy/Bike Box were also hitting the front hard in solid attempts split the field.

With the pace full on, already by 21km nearly half of the bunch had been dropped, Heaney’s GD Pringle team trying their best to clamp down on anyone bidding an escape; Christensen never far away from instigating dangerous moves was continually marked personally. Eventually two snuck away, Team Skoda-Fruzio’s Jayden Kuijpers launching hard, GD Pringle’s Xander White covering him dutifully.

Despite skirmishes behind from the likes of WBOP Performance Hub’s Campbell Stewart and Team Crediflex Cycling’s Matias Fitzwater, the two started to slowly gain time, a minute lead after 10km away. Working well, they increased their lead over the first pass of the Onewhero climb to over two minutes, while the remains of the bunch waited for each other to take the bait. Back on the flats and yet again Stewart and Christensen were trying to break the stalemate; Gough suffering an untimely puncture showed his turn of pace by regaining the bunch within two kilometres.

Entering the finale the activity levels rose, a group of four including Stewart and GD Pringle’s Logan Griffin drifting away while Heaney drilled it on the front keeping the pace high. At the base of the final Onewhero climb the leading two had a 1:55 lead, but with Kuijpers setting the tempo White dropped off, leaving Kuijpers alone to dig deep and hold off the chasers. Christensen, the first to initiate, attacked right from the base, quickly catching up with Stewart as the pack exploded behind him. Sensing weakness, Gough also kicked, forcing Heaney off the back for the first time in the race. Gough then bridged up to his teammate Stewart to turn the knife in tandem on the GD Pringle rider.

Up front, allowing himself the luxury of a glance back to the chasers, Team Skoda-Fruzio’s Kuijpers passed the line in victory, Griffin holding on bravely for 2nd, Gough coming in 3rd nabbing valuable points to promote him equal with Heaney for the Overall Lead.

“I actually really enjoyed that,” smiled Gough, “it’s good to stir it up a bit like that!” Gough even able to laugh off his mid-race puncture; “It was because I was number 13!” Heaney, while pleased to hold onto the Jersey, was humorous but reflective of his earlier efforts; “I’m not one to just sit in and hide, everyone knows that, and that came back to bite me at the end today. At that point [when Gough attacked] I was thinking I probably shouldn’t have attacked twenty times before the climb!”

Stoked with the victory, race winner Jayden Kuijpers was respectful of his breakaway companion; “He was riding strongly the whole time, we both worked well together, but at the bottom of the climb Xander had nothing left. He turned and said ‘Go on, good luck’ so I set my own tempo to the top.” Indeed, with four riders in top ten, Kuijpers’ Team Skoda-Fruzio easily claimed the days Teams Award, while GD Pringle Spoken Cycles held on to the Overall Series Lead.

With the Cat.1 race all over the road, it was a surprise to see a nine rider bunch sprint in the Elite Women race, despite the best efforts of Kerri-Anne Page of Castelli Women’s Racing Team to blow the race apart earlier on. All eyes were always going to be on the dominant Velo Project team, Race 2 winner Elyse Fraser the Race Leader with Race 3 winner Ally Woolaston in solid support, turning on the pace for the first climb of the day to fragment the field. Page continued this pressure, was also relentless in her attacks, then preceded to drag along the bunch so to quell the legs of the climbers in the finale. Laura Newman-Watt of Velo Project kicked early before the climb to try and spoil Page’s work, but was caught early on the climb, Deborah Paine of the North Island Women’s Performance Team the next to try her luck. Pulled back, Velo Project’s Annamarie Lipp aimed for a late attack but with an uphill headwind it was always going to be a big ask, the bunch ready for the gallop, Wollaston surging to take the sprint.

“On a course like this it was surprising to have a group sprint at the end,” said 2nd placed Elyse Fraser, “but we had three in the group so we were always going for the team points.”

“It was a big surprise,” agreed race winner Woolaston, “nothing really stuck so we were all just waiting for someone to kick it off, luckily I’ve got track legs at the moment!”

“When we got to the climb no one put in an attack, all the climbers were dead,” explained Page, content with her previous workload for her teammates. “I could just sit in and wait, play it smart and be patient for the finish. I was not expecting 3rd, I’m pretty stoked.”

With Woolaston taking the points for the win, Fraser passed the Overall Lead to her teammate, their Velo Project team increasing their lead in the Teams award.

BDO Auckland’s Matt Miln was the fastest up the climb in Cat.4, putting him into second place in the rankings behind O’Neill Sinclair of the Forestland Wheelers; Miln’s BDO Auckland team holding on to their Teams award. Tony Tinworth of the Taupo Cycling Club Blue Team taking the win in the Cat. 5 race to extend his teams points dominance, Russell Thorpe finishing just three seconds behind him to continue his Overall Lead.

Surprisycle’s Georgia Perry soloed to victory in the Open Women’s A race, putting over a seven-minute gap into the rest of the field, and with six Surprisycle riders filling the top ten it is no surprise that they extended their points lead in the Teams award. While Jane Carswell of Bob’s Bikes Pedal Chicks distanced Sam Sedgwick of the RABBITS – TOOT TOOT BEEP BEEP team to take the win in the Open Women’s B race, Sedgwick’s team moved further ahead in the Teams award.

With a break in the Series over the Christmas period, the Grassroots Trust Team Championship returns to the tough Tokoroa course on 3rd February, with what is expected to be an exciting final race just one week later at Tamahere.

For more information on the final two races of the Series and a full list of the results from each category of all of the rounds so far head over to the Team Championship event pages.