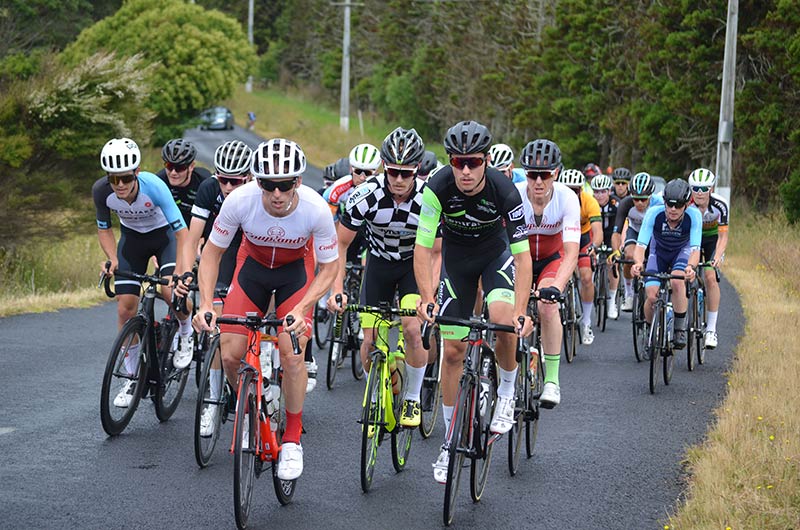 Velo Project’s Kirsty McCallum played it cool and calculated in the final Elite Womens race of the Dynamo Events Team Championship, the Grassroots Trust Onewhero Classic, taking the win on the day to become the Overall Winner of the series. While back to back wins in the Category 1 race rewarded Josh Kuysten of the GD Pringle Building / Spoken Cycles team the Leaders jersey with just two rounds remaining.

With double points on offer since this was the last race for the Elite Women, it was a fast pace from the flag, with riders getting dropped every slight incline because of the tempo set by the Castelli Womens Racing squad. Race leader Kirsty McCallum of Velo Project was ever present near the front, closely marked by the Castelli team. It was McCallum that was putting the squeeze on up the climbs and at the 28km mark she cracked them and slipped off the front with Kate McCarthy and Sophie Corbidge of Castelli on her wheel. The remains of the bunch was in pieces, down to just seven main chasers with multiple groups spread behind. Leading the charge were Barfoot and Thompson Performance Hub riders Queenie McElwee, Lara Hopkinson and Emma Hannan, Grassroots Trust Performance Hub’s Lee Boon and Tank Guy / Bikebox’s Kate Wrightman. Marking the move for McCallum was Velo Project’s Lucy Buckeridge.

The lead three rotated well, Corbidge obviously working for her teammate McCarthy by doing the loin’s share on the flats so to keep those chasing at bay, while McCallum and McCarthy kept tempo on the Onewhero rolling climbs. With their gap up to 40 seconds by the 37km mark, the trio kept an eye out behind, but on the longer straights it became obvious that this was the break of the day.

McCallum attacked hard twice on the lower slopes of the final climb, both times McCarthy was glued to her wheel with Corbidge dragging herself back to them. While McCallum chose to set the pace on the climb, as they rose onto the false flat it was still all together, Corbidge obligingly heading to the front so to lead her team leader McCarthy out for the finale. With only the final 200m drag to go, McCallum jumped early and held them all the way to the finish to cement her Overall title, McCarthy rolling in just behind for 2nd.

“Hannah [Bayard] and Georgia [Danford] did a brilliant job controlling it until we got to that first little pinch,” McCarthy explained post-race, “and then we just got away Sophie said she wanted to work, so I was happy to let her do it as I was just focusing on keeping Kirsty close. I actually crashed in Taupo two weeks ago and fractured my collarbone, so I can’t actually get out of my saddle too well and sprint, but I was determined to race this and not let the girls down. I really wanted to give it a crack to see if I could get her in that climb a little bit, but she’s got a good sprint on her.”

“Yeah, we were looking the individual ranking at today,“ said Corbidge, “especially since Kate was up there and I was sitting in 4th. We kind of had the plan to get away relatively early as we knew we had the support of our team mates through the first half of the race to protect us. I was super conscious once we got a gap that we were not letting it go. I’m not much of a sprinter so my aim was just to get to the finish as fast as I could. I tried to go for a long one but then my legs were screaming; ‘Ah Sophie, what are you doing!’”

“Sophie did a lot of the work for her teammate,” beamed a triumphant McCallum,” so I piggy-backed off that and tried not to ruin myself before the finish. I knew we had a little gap and I didn’t want to get caught, but once you are out of sight it’s a bit easier to keep it. I’d looked at the finish before the race and rode it a few times and thought if you don’t go at that last intersection you are not going to get it. It was before the 200m to go sign when I went and I thought I’d gone a bit too early but then I saw them fading.”

Their positions in the Onewhero round matched the final Overall podium, Corbidge’s work repaid by her Overall 3rd place, her Castelli teammate McCarthy eight points behind McCallum in 2nd with Velo Project’s Kirsty McCallum the Team Championship Overall Individual winner.

By the midway point they had 5 minutes on the bunch, and now it was clear the day was going to be decided by this break. Hitting the final 6km climb to the Onewhero finish the pace rose, with Kuysten and Gilbertson heading the charge and starting to distance the rest. Haden and Kuijpers managed to bridge across in time for the sprint, but Kuysten was ready to draw it out, taking line honours up the final drag.

“Yeah it was very grippy thanks to Theo there,” smiled Kuysten at the finish, “he made it very hard for me. I had to follow and commit on the climb, there was two of us away and he [Gilbertson] just kept attacking me, so I thought ‘Nah, I’m not going work with you now as you’re attacking me’. He made me lead out for the last km so I just sat myself on the front and went.”

“I’m happy with 2nd,“ reasoned Gilbertson. “I backed myself on the hill so I attacked at the bottom but just couldn’t get rid of Josh and I kind of thought he would have me in the kick so I kept attacking. Basically he was just glued to my wheel so I went again on the rollers after the hill but I couldn’t get rid of him.”

“That was like probably the most honest break I’ve ever ridden in!” laughed Haden. “We were all in, just kept working, just kept just drilling it, and the boys were communicating well, and hardly anyone missed a turn. It was probably the most honest way to finish a bike race coming up that hill, it’s torture. The strongest dude won, and yeah, he’s impressive. I knew that the young fellas would hit the climb pretty hard early on and my plan was to try and hit ‘TT’ mode and sit into a steady power. I’m a bit of an old boy and I’ve got to look after the old pins so I knew If I went with the surges I just would be toast by the time I got to the top. Nah, I’m happy with that, it was worth the driving bloomin’ half way up the country to get here.”

The repeat victories for Kuysten elevates him into the Leaders jerseys in the Individual competition, his GD Pringle Building / Spoken Cycles squad also top the Teams leader board heading into the short Christmas break.

Team Body Performance riders led the podium in the Open Women category, Anne Marie Guiney taking the win ahead of teammate Amanda Till, with Individual leader Aimee Shaw of the Cycling New Zealand Development squad bringing the rest of the field home to hold onto her jersey and help her CNZ squad take top spot in the Teams rankings.

Richard Hellaby of the Quadrant / PTM squad just edged out Signature Homes Racing’s Craig Burke to get the win in the Category 4 race, Robert Douglas-Jones of Stantec getting the best of the rest for 3rd. Burke holds the Individual lead while Hellaby’s Quadrant / PTM squad played their joker to jump ahead in the Team points.

The Team Championship continues on the 19th January, the location still a mystery so to provoke teams to choose riders conservatively, the only clue that it is within reach of Hamilton. Racing starts at 10.00am, so keep an eye on Dynamoevents.co.nz for the latest updates on the final location and all the results from the Championship so far.