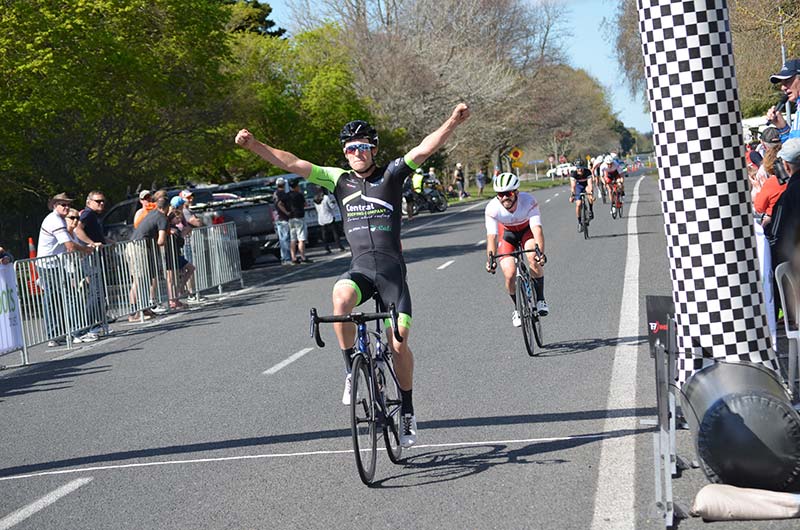 Despite multiple attacks throughout all of the first races of the Grassroots Trust Team Championship, the short flat Cambridge course delivered bunch sprints across the categories, with Georgia Danford of the Castelli Womens Racing team taking the victory in the Elite Women race and Team Central Roofing Revolution Cycling’s Tom Sexton steering clear of a last corner crash to nab the Category 1 win.

Beautiful sunny spring weather greeted the sixty-seven teams to the Cambridge race headquarters, with old friends and rivals from all of the seven categories catching up before the racing, all with plenty of new kit to show off for the new season.

The days racing started with a 25km team time trial, with Team Body Performance Clinic the first to roll off the startline. Their posted time remained on top of the leader board in the Open Women category, this new team notching up their first win in their very first race, beating second placed HIREACE by nearly two minutes, with Super TOOT taking third.

In the Elite Women category Velo Project continued their winning form from last year, taking nearly twenty seconds out of Castelli Womens Racing and the Grassroots Trust Performance Hub team. More shots were fired across the bows in the Category 1 race, with the obviously well drilled Coupland’s Bakeries squad delivering the fastest time just ahead of defending champions GD Pringle Building / Spoken Cycles, with Team Skoda – Fruzio taking a solid third.
Offering little respite for the riders, the road racing kicked off just after midday, the relatively flat course producing aggressive racing across all of the categories as riders attacked to split the bunches.

Indeed, it wasn’t until the halfway mark of the 64km Category 1 race that a relatively stable break was formed. Initially instigated by Cabjacks – Castelli’s Logan Griffin and Tom Sexton of Team Central Roofing Revolution Cycling after long succession of high speed attacks from all the major teams, a move of 14 riders kept the bunch dangling at 30 seconds for the rest of the race, and despite a late unsuccessful move by G D Pringle’s Michael Torckler, it was looking like it was all coming down to a final sprint.
With three other Coupland’s Bakeries riders making the break, Nick Kergozou knew his team had to take control; “We went to the front and rode, doing an epic job after the team time trial, and everyone just sat on as they knew we were the strongest team there. I was rolling with them but with everyone sitting on I thought I’d better play it sensible and go back and let the team just isolate every move until the end.”

CNZ Development’s Regan Gough had other plans; “I thought I’d roll the dice with a ‘k’ and bit to go to see what happens, but I went into the last corner at the same time as some recreational riders and ended up going wide onto the grass, which slowed me.”

Behind him, the break was starting to jostle for position into that crucial left hander after Coupland’s had kept the tempo high ready for Kergozou to launch his sprint; “Regan went early and I just waited until Glen [Haden] and Madi [Hartley-Brown] had pulled off. Unfortunately, we just came into that last corner too hot and someone else slid out and Madi came down in front of me, so I had to jam on the anchors!”

“There was a bit of argy-bargy and it was pretty full gas coming into that last corner,“ explained winner Tom Sexton, “so I knew I had to be first wheel. I thought it was all over when Reggie had gone early, but coming out the corner I had a bit of a lead on Nick and managed to mow down Reggie.”

“It was cool to have a few teams that were committed to riding as a team,” reflected 3rd placed Gough afterwards, “it is a different dynamic from the rider verses rider battle, and we don’t often have that.”

Kergozou was happy with the way the day played out too; “Having the TTT win and getting 2nd, it was a pretty good result.”

After some solid racing in the Elite Womens race, that too came down to the final gallop. “It was fast from the start,” recalled 2nd placed Maddi Douglas from the Velo Project squad, pipping Tank Guy / Bike Box’s Nicole Shields, “the Castelli girls were always trying to get away and my teammate Lucy [Bukeridge] gave a few attacks but nothing really stuck.”

“Yes, we had a team plan,“ beamed winner Georgia Danford from the Castelli Womens Racing team, “two of us sat in most of the ride and the rest of our team did everything so I was definitely fresh. We had a great train going with about a ‘k’ left and we just smoked it right from the last corner so got a gap and I ended up rolling for first and our team manager Hannah Bayard got fourth, so it was a good finish.”

Velo Project’s Douglas was happy with 2nd in this first race; “I knew Georgia was going to be a fast sprinter when it came down to the finish so I was trying to hold her wheel as close as I could. When we came through the corner I followed her and it worked in my favour, she kicked at the right time and I was in the right place and it worked out well.”

The teams will next cross swords on the tough roads of Tokoroa, the first of two rounds held there. Racing starts at 10:00am, for more information about the next round and a full list of results and overall points ranking of each of the categories from the Cambridge round head over to head over to Dynamoevents.co.nz