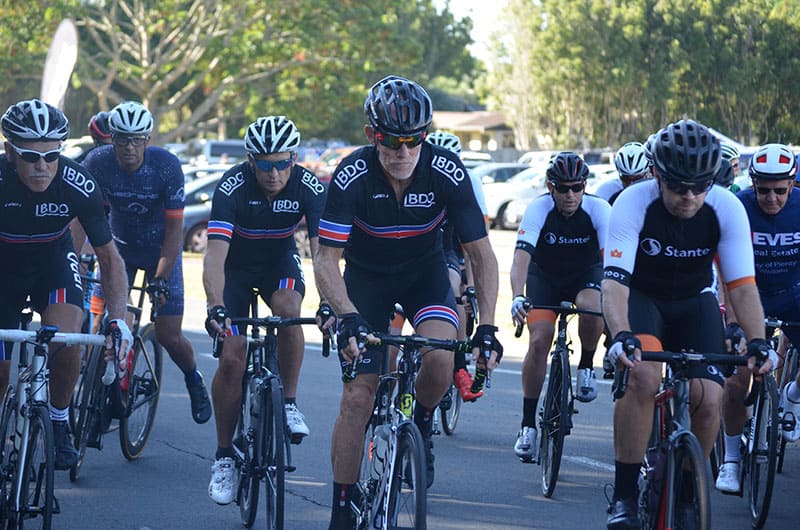 Boasting the flattest profile of the entire six race series, everyone was expecting a fast and furious bunch finish for the final round of Grassroots Trust Team Championship, everyone that is except Team Crediflex Cycling’s Frank Sutton. Although no slouch when it comes to his sprint, Sutton preferred to distance his rivals leading in to the Tamahere finish, powering away and holding them off to take the solo win.

With GD Pringle/Spoken Cycles rider Alex Heaney wrapping up the Overall Individual Award after his win in the previous Tokoroa round, the main objective his ‘Pringle’ team was to secure the Team’s Award from the ever dangerous Team Skoda – Fruzio squad. On the fast rolling roads of the Tamahere circuit Heaney’s team initially held court, despite some of the fastest average speeds we’ve seen all series.

Eventually the bunch snapped 25km into the 98.5km route, 16 riders easing away from the main field, and with most teams represented they started to slowly drift up the road. With three riders each from Espoir Racing and Dynamo Events they had a numerical advantage over Team Skoda-Fruzio, GD Pringle, Team Paxton and Team Crediflex Cycling, all of whom had two riders each, while Team Central Roofing Revolution Cycling and WBOP Performance also snuck in a rider each too; Heaney content to watch the action from back in the main bunch.

Despite the five-man Tank Guy /Bike Box team doing their best to pull it back, the 16 man combine up front were working solidly and fluidly, pushing the gap out to 1 minute 30 with 10km to go. The bunch distanced, the break’s steady workload started to show fractures after early digs from the likes of Sutton, WBOP Performance Hub’s Sheldon Gorter and Espoir Racing’s Bryn Thorne-George, all indicating they were not going to settle for a drag strip sprint.

With 3km to go Sutton attacked again, this time it stuck taking with him Dan Furminger of Dynamo Events and Espoir Racing’s Greig McDonnell, Gorter drilling himself trying to bridge across. With the bunch quickly closing in on them as they ran out of road Sutton took a flyer, Furminger and McDonnell swallowed up for Team Paxton’s Dan Cross to take the bunch gallop, Logan Griffin of GD Pringle/Spoken Cycles nabbing third.

“I was pretty happy to win that one,” beamed Sutton at the finish, “I just didn’t want to leave it to a sprint so I tried to draw a group out after the last hill, but it didn’t work. I waited for the tailwind section to attack as it was going to be too hard to ride solo in the wind; I counted three times before I finally got the three of us away. With a ‘K’ to go they were charging behind so I just had to go early and buried it all the way to the finish.”

“There was a little bit of cat and mouse starting to go on near the finish,“ laughed Dan Cross, “but when Frank went with 3k’s to go everyone was a bit hesitant to chase because no one wanted to waste their legs for the sprint. I was in a good position with 500 to go but we didn’t quite get Frank on the line. I’m pretty happy with 2nd though.”

“This has been four years in the making,” said Heaney of his Overall win, “so it’s pretty cool. But it’s all about being persistent, that’s how you go good in a series like this.” WBOP Performance Hub’s Regan Gough eventually finished 2nd in the Series, Sutton’s win elevating him to 3rd Overall to complete the podium.

The GD Pringle success continued down the categories, James Harvey escaping the field to take the win in the Cat.2 race ahead of Daikin/Thermal Solutions rider Gordon McCauley and Harvey’s ‘Pringle’ teammate Logan Holzer, Harvey’s win scoring him the win in the Overall ahead of Glen Carabine of Thermal Chemistry/Dynamo Events and McCauley; the Velolab Valley Toyota Image Glass squad securing the Team Award.

Andrew McKay’s win in the Cat.4 race assured his BDO Auckland team to win the Team prize, while O’Neill Sinclair of the Forestland Wheelers 2nd place in the race seized the Individual Overall Award over BDO’s Matt Miln and McKay.

With GD Pringle / Spoken Cycles claiming the Overall Individual and Team prizes in the Cat.1 and winning both Cat.2 and Cat.3 races, Team Manager Blair Taylor had much to celebrate; “Today was just the icing on the cake for us. Although it’s what we do and what we love, we all get on really well on the team, which just makes it better when you are all over the podium.”

For more information on the final race of the Series and a full list of the results from each category from all of the rounds head over to the Team Championship result page.