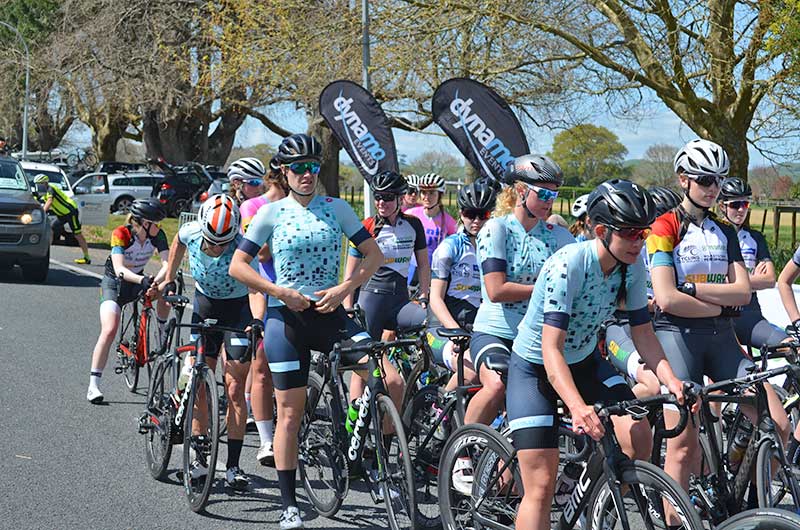 Straight from the flag the racing was full gas in both the Category 1 and Elite Women events during the Waikato District Council Grand Prix on Sunday, the third race of the 2019/20 Grassroots Trust Team Championship series. Both races dictated by moves in the opening kilometres, Josh Kuysten of the GD Pringle Building /Spoken Cycles squad sprinted to victory in the Category 1 race after some solid work by his teammates, while Velo Project’s Kirsty McCallum pipped her fellow escapee Kate McCarthy of the Castelli Womens Racing team to take the Elite Womens race after they’d both been away for the majority of the day.

Early heavy skies lifted as the racing kicked off from Ngaruawahia at 10.00am, the speed of the groups indicating that the riders were happy to get into the 87km of rolling back roads that included over 900m of climbing.

Amongst those keen to motivate an early move in the Category 1 race were Glenn Haden of Coupland’s Bakeries and Capjacks – Castelli’s Logan Griffin, with riders from the GD Pringle squad ever present. By the 15km mark a group of nine had started to keep a steady distance from the bunch, the time gap growing to over minute within the next 10km.

Behind them riders were getting spit from the main bunch, the relentless terrain and pace eventually forcing the field into four groups spread back along the road, the pressure also squeezing Pronk from the break.

Playing the dutiful domestiques today, GD Pringle’s Torckler and Harvey spent the last 20km chasing down attacks from those not content to settle for a sprint finish, in doing so kept Kuysten fresh for the finale; even Haden’s late dig failed to spoil the show.

“It couldn’t have worked out any better,“ concluded race winner Kuysten, “we definitely had the numbers there for sure. The last 20k I just sat on while Mike (Torckler) and James Harvey followed everything – it was perfect!”

“It was a matter of coming up with a plan when you’ve got three guys from one team in the break,” explained eventual third placed Haden, “it was ‘how do we do this’? I started having a few cracks with about 10 to go but basically Mike was the key domestique and kept shutting everything down. Coming into the last corner I thought I’d see if I could get a bit of a gap but I just got swamped along the straight. But thirds cool, on the box and representing, so it was a good day out.”

“They (Pringle) had the numbers in the group so I was in a bit of a ‘rock and hard place’ situation, but I’m really happy to get some points, “ Griffin said of his second place, “and we had two others finish in the second group behind us meaning we got some more points for the overall, so it was a pretty successful day all up.”

An almost carbon copy of her Tokoroa performance saw Kate McCarthy of the Castelli Womens Racing team away for the majority of the Ngaruawahia race in a two-up break, then narrowly beaten again by a Velo Project rider, this time Kirsty McCallum.

As with the Category 1 race, the Elite Women weren’t hanging around, with the Tank Guy / Bikebox team instigating a break of four that included McCarthy and McCallum that quickly caught the race category ahead of them on the road within the first 20km. Hitting the first of the real climbs the two escaped, working strongly together to maintain a gap on the bunch behind.

While the two were up the road, their Velo Project and Castelli teammates controlled the rest, forcing the pace on the climbs to reduce the group.

Heading into the final straight McCarthy positioned McCallum to lead out; “but she just went and I just couldn’t go with her,“ said the Castelli rider McCarthy of her second place. “The two of us just went early and worked hard, I don’t even know if we were quite 20k in when it went, so it was a long day. It’s the second time I’ve been in the break for the second time running, so I’ll take it!”

“I thought we’ll just go long range today and see what happens” beamed McCallum at the finish line, “and I knew Kate was obviously keen to commit to it from last time. It was a beautiful course, it was relentless though, but when I had chance to look around it is definitely a beautiful part of the country.”

Cycling New Zealand Development squad rider Aimee Shaw continued her consistency in the Open Women category, her win earning her the Individual Points jersey and extending the squads lead on the Team Points table, and while Charlie Tattersfield of the Grassroots Trust Performance Hub took line honours in the Category 2 race, second placed Ethan Craine defended his Individual lead with his Tank Guy / Bikebox team nearly twenty points ahead of Burnsco BSR in the team rankings.

Podium Lodge / Spoken Cycles hold onto their lead in the Category 3 event, with team rider Blake Bailey helping by nudging out Burnsco BSR’s Kevin Palmer for the win, moving him into the Individual lead. Craig Burke of Signature Homes Racing took a solo win in the Category 4 race, edging him closer to teammate Shane Pointon’s lead, and with four riders in the Top 10 BDO Auckland hold onto top spot in the Team Points table. Second on the day to Andrew Feringa of HIREACE meant that Burnsco Gold’s Kieran Benade extended his lead in the Category 5 individual race, with the squad of McKenzie and Co / E G Whiter swooping into the lead in the Team Points after using their ‘joker card’ for this round.

Next race in the series sees the return to Onewhero on 15th December, and is one race that always provides a fantastic finish. As usual, racing starts at 10.00am, and for more information on this event and all the race results so far in the Grassroots Trust Team Championship head over to Dynamoevents.co.nz.