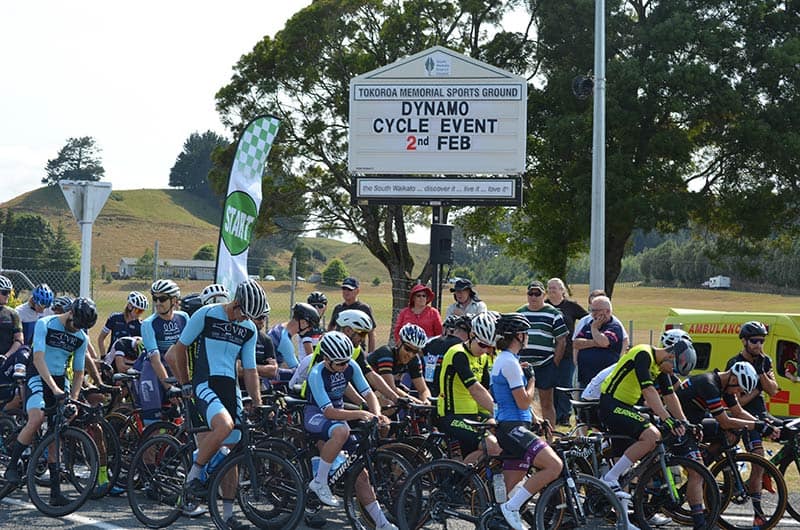 With double points on offer no one was holding back in the South Waikato District Council Final, the last race of the 2019/20 Grassroots Trust Team Championship. Tokoroa’s notorious tough chip rolling forestry roads combined with a consistent niggling breeze and the days heat produced honest racing performances across all of the six categories.

It was clear as soon as the flag was pulled in that the Category 1 race was going to be a full noise affair. Within the first 2km a group of five had managed to pull away from the animated bunch, no one hanging around, which made GD Pringle Building / Spoken Cycles Michael Torckler’s untimely puncture and resultant chase back on all the more impressive. With riders away from Coupland’s Bakeries, Team Central Roofing Revolution Cycling, Cabjacks-Castelli, Team Skoda-Fruzio and GD Pringle Building / Spoken Cycles the bunch slightly calmed, the group gaining nearly a minute by the 12km mark. However, the sight of Race Leader Kuysten going backwards on the forestry rollers started a flurry of attacks, the race exploding into little groups all over the road and the break shedding time dramatically.

With Kuysten missing it was Coupland’s who took charge, their riders Glenn Haden and Nick Kergozou in 2nd and 3rd Overall with the most to gain, the red and white riders closing the break down and policing the remains of bunch.

Not content with sitting on, Dynamo Events rider Frank Sutton was keen to instigate the next move, the likes of GD Pringle’s Alex Heaney never far away, the tempo still strong at the halfway mark. Eventually another group of five escaped, Coupland’s Haden away with Heaney, joined by Liam Cappel of Cabjacks-Castelli and Team Central Roofing Revolution Cycling’s Tom Sexton and George Jackson. With Haden keen to steal the Championship from Kuysten, Heaney sat in while the GD Pringle Building squad sat on the front of the bunch to hem their lead. Torckler, doing a lion’s share of the chasing, shed riders and disintegrated the main bunch while he clawed back the break. This pressure exploded the lead group, Heaney taking a flyer off the front, the others drifting back as Dylan Kennett of Team Central Roofing Revolution Cycling launched. Bridging across to his teammate Sexton, Sexton then buried himself to ensure Kennett carried on to catch Heaney, the front two then ploughing on together.

Another kicker saw Torckler apply even more pressure, only Kiaan Watts of Team Skoda-Fruzio and Cabjacks-Castelli’s Logan Griffin able to grasp his wheel, the bunch heavily depleted, the majority in small groups of two or three now crawling home.

Working strongly together and staying a solid 50 seconds ahead, Kennett and Heaney contested the sprint, with Kennett, a Commonwealth Games medallist and former Team Pursuit World Champion, taking line honours. Behind, the three chasers battled it out for the rest of the points, Watts coming from behind to take 3rd, Torckler edging out Griffin, while Kergozou nabbed the bunch sprint for 6th, 48 seconds behind them.

It was down to the numbers, with the suspicion that Torckler, Griffin and Kergozou were all close to Kuysten’s overall lead of 41 points. Eventually the results were released, Griffin and Torckler tied with 38, Kergozou racking up 37; Kuysten the Category 1 2019/20 Team Championship victor.

“Happy days,” grinned Kuysten just after he heard the news of his win. “That was unexpected after today as I knew it was going to be close with double points. Full credit to the team, with Alex and Torckler soaking up the rest of the points there too, I’m stoked, absolutely stoked. It’s been an enjoyable series.”

“Everyone was having a crack,” said Kennett of the fast race, “and I thought the teams did a real good job of racing professionally and racing tactically. Sometimes in other races you see some dumb stuff going on, chasing their own teammates, but there was really smart riding from everyone today so made for quite an interesting race.”

“We were on the back foot a little bit after we lost Josh early on,” admitted Heaney. “He’s been crook this week and had a bad day today. We changed tactics a little bit and pretty much went on the offensive instead. It was a pretty cool race, everyone was keen to give it some ‘bikkies’ so it was cool to get amongst it, and it nearly panned out alright at the end.”

Another race all over the road was the Open Women category, with Race Leader and Cycling New Zealand Development rider Aimee Shaw doing what was required, mainly watching her rivals, such as 2nd placed Amanda Till of Team Body Performance Clinic, like a hawk. In the finale, a group of 11 contested line honours, Shaw sandwiched between race winner Ruby Spring of HIREACE and 3rd place Anne Marie Guiney of Team Body Performance Clinic. Extending her lead, Shaw took the Overall Winners title, with Spring 2nd and Till finishing 3rd.

“I’m pretty stoked with the win,“ beamed Shaw just before the final podium. “It was pretty hard, but it was fun. I didn’t make any attacks, just chased each attack, as that was the plan. Up each hill I just stayed on Amanda’s wheel, then we worked together dropping other riders.”

Sprinting to 9th place behind race winner Craig Connell of BDO Auckland and Eves Real Estate’s Andy Gilman gained Signature Homes Racing rider Craig Burke 4 points, the 4 points he needed to edge out Connell for the Category 4 Overall Winer title, with Eves Real Estate’s Steve Newlove finishing in 3rd Overall. Quadrant/PTM and BDO Auckland tied in points for the Overall Team prize, the nod going to BDO for the most points gained on the day, Eves Real Estate completing the podium.   With Category 5 leader Kieran Benade not racing the final round, it was his Burnsco Gold teammate Aaron Wheeler who stepped up to take the race win, finishing nearly three minutes ahead of James Ward of the Sprocket Rockets team and Olano Scarlett of McKenzie and Co / E G Whiter. 3rd in the Overall Individual competition, Scarlett’s consolation was for his McKenzie and Co / E G Whiter to take the Overall Team win, while Benade held on for the Overall Individual prize, with Wheeler moving up to a close 2nd.

Next up on the Dynamo Events agenda is the New Zealand Grand Fondo on the 15th February, followed by the four-day BDO Tour of Northland in March, but for a full list of the results from each of the Team Championship races and the overall final placings head over to Dynamoevents.co.nz