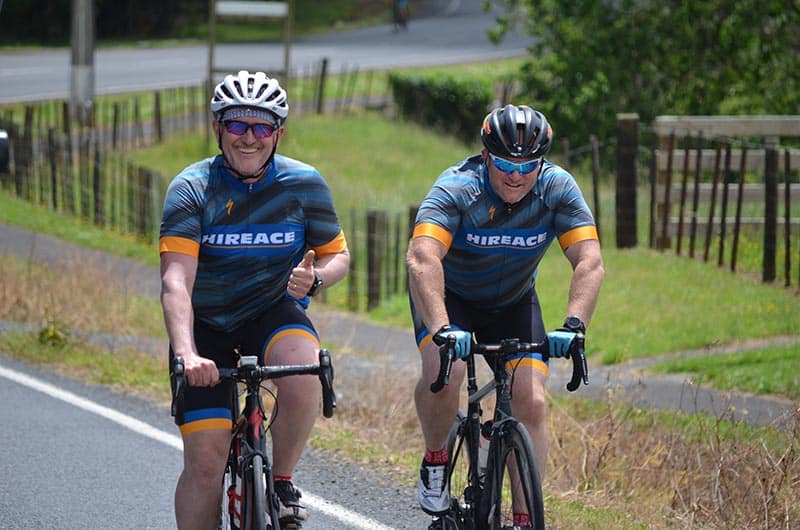 It was day for animated racing, with breaks forming early in both the Elite Women and the Category 1 races during second event of the Grassroots Trust Team Championship. The South Waikato District Council – Forrest Classic held around Tokoroa’s rolling countryside saw Holly Edmondston of Velo Project take the win in the Elite Women race after being away almost all of the day, with Coupland’s Bakeries rider Nick Kergozou toughing it out to chase an early break and then surviving a late charge to take the sprint win in the Category 1 race.

Greeted to Tokoroa with blue skies, the chill in the air lifted before racing got underway, the speed hot right from the flag with riders getting spit out of the bunches within the first tem kilometres. After some initial activity, Velo Project’s Holly Edmondston managed to pull away from the Elite Women’s bunch, with Castelli Womens Racing’s Kate McCarthy jumping across to her to form an alliance.

Quickly the pair pulled a minute gap on the field, with their teammates blocking the chase notably from Tank Guy/Bikebox and the Barfoot & Thompson Performance Hub riders, the two escapees working strongly together. As the tough chip roads turned onto the forest hills Velo Project and Castelli Womens Racing both turned the screw on the remaining bunch, squeezing out all but Kerri-Anne Page from the Tank Guy/Bikebox team and three from the Barfoot & Thompson squad, leaving a group of nine with the two ahead just in sight on the long straights.

As the finish approached it became clear the bunch was readying for third, only the two leaders preparing for line honours. “I joked to Kate once we were near the finish if she’d planned on doing this from the start and she said ‘nah!’” laughed Velo Project’s Holly Edmondston, “and I said ‘me neither!’”

“But she would not have bridged if she wasn’t committed to working, and I just love it when people get into an attack. I thought we did an even amount of work, maybe I was putting the pace on more when it was on the flat but she was really putting the throttle down up the hills – she’d have me on the rivet there. Around the back I just said to her ‘we need to be steady and we’ll keep it,’ and then that last 10km we just went for it.”

“Holly did some quite hard turns on the front,” recalled Kate McCarthy of Castelli Womens Racing, “and I tried to keep it with her, giving as much as I could. I knew before the finish that she was definitely going to beat me in the sprint, but she said to give it go. I tried but just started to cramp up.”

With Velo Project’s Ally Wollaston and Kirsty McCallum taking 3rd and 4th it was a successful day for the team and no surprise they lead the Team Points table, with Holly Edmondston and Castelli Womens Racing’s Georgia Danford now equal in points for the Individual title.

For a majority of the 93km Category 1 race breakaway groups kept those who had missed the moves chasing, leading to some hard riding from the likes of the Coupland’s Bakeries and GD Pringle Building/Spoken Cycles teams. Up front Regan Gough from the CNZ Development squad led the way, and together with Liam Cappel (Capjacks – Castelli), Greg Marfell (Team Central Roofing Revolution Cycling) and Dan Furminger (Crown-Global Security) the break kept the chasing group a steady minute away until the Tram Road climb at 68km. Here the race blew up, with another move that included Points Leader Tom Sexton (Team Central Roofing Revolution Cycling), Michael Torckler (GD Pringle/Spoken Cycles) and Corbin Strong (Team Skoda-Fruzio) going clear. Not giving up without a fight, Coupland’s Bakeries riders Nick Kergozou and Glenn Haden teamed up with Campbell Stewart (Dynamo Events) to claw them back within 5km of the line.

Spotting the sprinters in this final group, Capjaks-Castelli’s Logan Griffin went for a long attack with 2km to go and was first into the final corner. Behind him Nick Kergozou had already started to wind up his sprint though, catching Griffin just before the line, Corbin Strong squeezing past for 2nd.

“I saw the opportunity to attack the group with about 2km to go,” said Logan Griffin, “but as we were coming down into town I started cramping up so I took a sneaky stretch as I came across the train tracks. I thought I had it, but you can only ride so fast when the dudes behind you are going that quick.”

“It was a brave move by Logan and he just missed out, “observed Corbin Strong post-race. “I was on Tom Sexton’s wheel going into the sprint but ‘Kergy’ went really early, and it was an impressive sprint. Once I stepped out to go he already had a big gap and held on.”

“It’s a real heavy chip out there and the little bit of wind made for a hard day, so there was a lot of dull legs by the finish, “ beamed winner Nick Kergozou. “The break went early so it was just chasing all day, and once I’d bridged across then it was a case of getting the legs to recover enough for the sprint. I wasn’t too confident as I felt a bit of cramp out there over the hills.”

“I was on Reggie’s wheel (Regan Gough) and thought I’d go up to Corbin and Tom (Sexton) but going into that last corner I was in the wind so took it upon myself to lead it out pretty early.”

With a 2nd from the previous round and the points from this win, Kergozou moves into the lead on the Individual Points table, with GD Pringle Building/Spoken Cycles holding their lead in the Team Points.

Tank Guy/Bikebox’s Ethan Craine nudged out Aaron Strong of Bursco BSR to take the Category 2 race and the Individual Points lead, with Charles Smart of Pink Moose Cycling completing the podium. Tank Guy/Bikebox just a single point ahead of Burnsco BSR in the Team standings.

The racing continues next month, heading to a new Ngaruawahia circuit on the 17th of November. For more information about the next round and a full list of results and overall points ranking of each of the categories from the Tokoroa round head over to Dynamoevents.co.nz